A Simple Walk Through: Why Home Prices Have Not Reached Bottom

Most people I know and interact with on a day to day basis do not not that I am a finance nerd. If you met me or even if you are someone that has known me for years it would difficult to discern. I spend a tremendous amount of time with friends, watching sports, playing basketball, and doing "normal" people things. Its only during alone time when everyone is tucked away in their normal lives that I open the laptop or current book I'm reading to delve back into the exciting world of global finance.

I was visiting my cousin last night who was nice enough to welcome me in to his home in Raleigh, NC. We began talking about normal stuff, which somehow led to a financial topic. I began to briefly give me thoughts and he asked me a question, and another, and another, which I went on to explain. Somehow it led to derivatives, which is a place you do not want to go while watching Thursday night football. Anyway, he found out last night that I am a finance nerd. 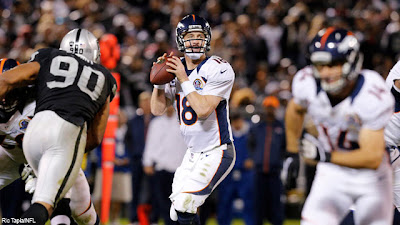 I bring this up because the discussion finished with, "is this a good time to buy a house" as it so often does. This is always a very difficult question to answer in just a few sentences, which is why I have tried to dedicate a large portion of this website to answering it including this year's massive real estate outlook.

I came across a chart this week that provides a tremendous visual tool to explain a piece of the real estate puzzle: the concept of interest rates.

Imagine that you are an average working American family and you decide it is time to purchase a home. The first thing you most likely do is figure out how much you can afford. That begins with a calculation of your monthly income to determine after taxes, other expenses, and what may be put away in the 401k, how much you have left for a mortgage payment every month.

We'll say that this family, the Thompsons, determine that number to be $1,100 per month. I would guess this is very, very, close to the average number for middle class families in America (based on average income data).

Now with this number they head down to the bank. They tell the bank they want to buy the maximum amount that $1,100 per month will allow. The bank representative opens up their calculator and writes down a number on a piece of paper. The Thompsons then call their real estate agent with this number in hand and start looking at homes.

Let's pause for a moment to take a look at the most important and misunderstood piece of this entire process: the impact of mortgage rates on the number the bank representative writes down. 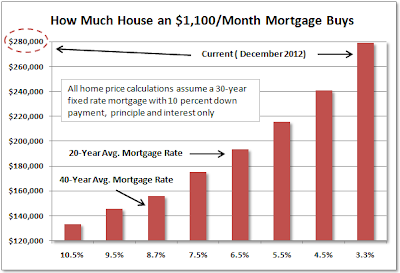 Now let's move forward and see how this plays out. If the Federal Reserve and the government, which have nationalized the mortgage market, can artificially push rates down to 1.5%, imagine that the Thompsons had the opportunity to lock in at that rate.

The Thompsons rush out to purchase their $350,000 per month home with only $1,100 per month in payments. They are feeling real good about themselves. Then they hear on the news that interest rates begin rising. "Who cares?" they say, they have already locked in at the low rates making them the smartest buyers on the block.

Interest rates are now rising quickly, beginning to move back toward the normal historical rate between 7 - 10%. Rates stop at 4.5% (still historically very low) when the Fed announces they will purchase another round of mortgages. Two of Thompson's neighbors put their home on the market to cash in on their new $350,000 home price. Buyers show up to look at the home but they have some bad news.

With interest rates now at 4.5% new buyers only have the ability to pay a maximum of $240,000. They like the home, they tell the sellers, but the only way they can afford the monthly payments would be if they dropped the price by $110,000.

After talking to their neighbors the Thompsons have a sick feeling in their stomach. They realize that by locking in at the all time record lowest rates in history they have moved into a coffin. Every tick upward in interest rates means less buyers that can afford their home and a lower price.

Does this help explain why buying at low interest rates is the worst possible time to purchase real estate? Especially when they are created artificially by the Federal Reserve.The Fed is doing everything in their power to create another artificial bubble. As soon as interest rates either stop going down, or (gasp) begin to rise, home prices will plunge. 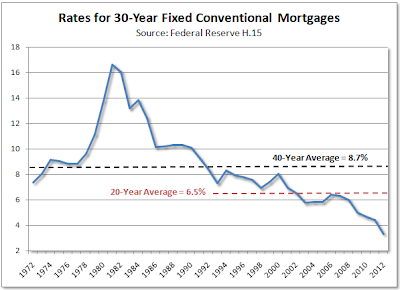