How Those Giving Up Looking For Work Impact The Gold Price

One of the more interesting parts of the Fed's recent addition to the QE-ternity program, initially discussed here, is that it is now tied to the unemployment rate. This has been dubbed the "Evans Rule."

The Fed has promised to keep pumping at least $1 trillion ($85 billion per month x 12) of freshly printed currency into the system every year until the unemployment rate reaches 6.5%. It currently stands at 7.7% today.

The second part of the equation, which they announced over the summer, is that the Fed will continue to keep pumping money into the system until the inflation rates reaches and stays above the 2% annual mark.

The notion of both of these two goals, to somehow tie them to printed money in the system, is pure lunacy for reasons I hope long term readers of this site understand. We'll look beyond how this obviously will hurt the health of the economy in the long run and focus on how it will impact the financial markets; specifically gold.

Gold has initially sold off on the addition of the QE-ternity program which has left many perplexed. There are countless reasons for short term moves in the gold market but one of them can be tied directly to the announcement of the Evans Rule. Market participants feel that the unemployment rate can reach 6.5% a lot sooner than the point they initially thought the Fed would slow down their printing.

The following graph shows the labor force participation rate, the percentage of Americans that are actively looking for jobs, since the 1950's. You can see that the participation rate was very low during the 1950's and 1960's. Did this mean that an enormous amount of people had "given up" back then and the economy was very unhealthy? No, it was the exact opposite. The 1950's and 1960's period was the peak point of America's economic greatness. It only took one income to support an entire household, meaning that a mother could stay at home and take care of the children. They were not part of the participation in the job market - for good reason, they didn't need to be. 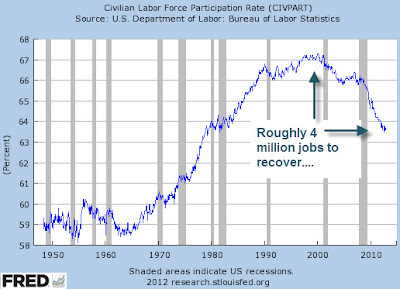 The steady rise in the participation rate was the slow and steady rise of women into the work force. While women are proud of the fact that they are part of the working population today, I assure you that many would prefer to have the choice in going to the office every day. Many would rather have the option of staying home with their young children. That option is gone today.

People consider the fall in the participation rate since the peak in 2000 contributed mainly to baby boomers retiring. We know that the largest number of boomers hitting retirement age did not begin until 2010. We also know that a tremendous amount of boomers that planned on retiring have now extended their working years due to the financial crisis.

The following chart shows the employment demographic by age since 1970. Pay particular attention to the portion of the graph since our "recovery" began. You can see that those aged 55 plus (red line rising) have been the major addition to the jobs market taking over 4 million new jobs during this period. The major losses in jobs have come from those aged 25 - 54 (dark blue line that peaked and then fell once the crisis hit - they have lost their job). 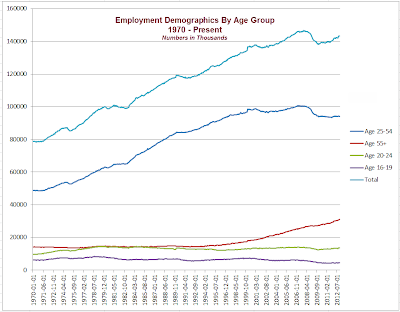 Here's an easier one to visualize. The labor participation rate of those 65 and older (green arrow) vs. those 25 - 35 (red line). The youth have given up, while the older generation is looking for jobs instead of retiring. 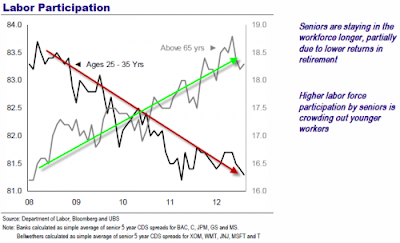 So how does this all impact the unemployment rate, the Fed's policy, and gold? If the economic depression continues lurching forward it could create an environment where more and more workers give up looking for work, "helping" the unemployment rate. There is also the lack of hiring, so far, in the residential real estate construction portion of the economy even though the government and Fed have blown up another mini housing bubble that has led to new homes being built. The blue line below shows the recent pick up in housing starts for residential building. The red line shows that the number of people employed in this sector continues to flat line and fall. If the builders ever begin to grow their staff again it would also help the unemployment rate (or perhaps they understand that this is all artificial and temporary? we'll see). 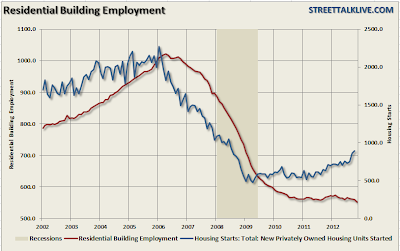 The economy could enter an environment where it is in a worse fundamental position and the Fed slows their printing because they "promised" the 6.5% rate was their target. We would have an economy of people that have given up looking for work to collect welfare (see Welfare Vs. Working: Retiring Young In America) and those that are once again employed adding to the housing supply with more homes that we don't need (the banks could just unleash the shadow inventory into the market and we would have enough housing for the next few years).

If we were to hit 6.5% unemployment tomorrow (everyone gives up) and the Fed stops printing, where would the fair value of gold be based on the money that has been printed so far? The following chart provides the update. The blue line shows the base money in the system vs. the US gold holdings, essentially what it would take to back the current money supply with gold - simple accounting. That number has now risen to $10,039 for an ounce of gold. 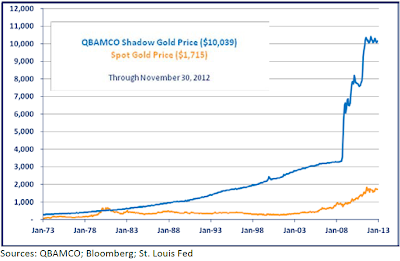 The following shows the base money trajectory projected out through 2015 under the new QE-ternity program. You want to sell your gold when the yellow line crosses above the blue line, which has happened twice in the last century (1932 and 1980 - both charts show the 1980 cross over). That is the point when gold moves to "overvalued" based on fundamentals. We'll get there again this decade. 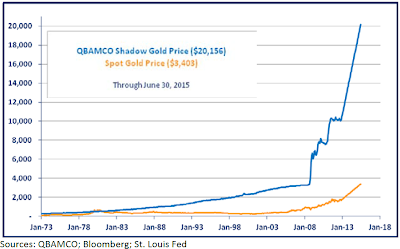