No piece of financial news on the week could possible take center stage over the tragedy that happened in the Newton Elementary school shooting. Events like that always make you step back and appreciate what is way more important than finance in life; health and family.

That said, let's take a quick run through some of the best charts and data points on the week in no particular order.

The first chart shows the percentage of those now bullish on stocks surging up to 77%. NBC News recently reported that "even the bears are bullish for 2013, a year in which every Wall Street expert believes the market will post a positive year." The average gain for 2013 called for by a group of 15 brokerages polled was 14%. Readers here know that the more bullish people become on an asset class the more I am ready to run for the exits or go short. When everyone is on one side of the boat, it is time for (at a least a temporary) reversal. 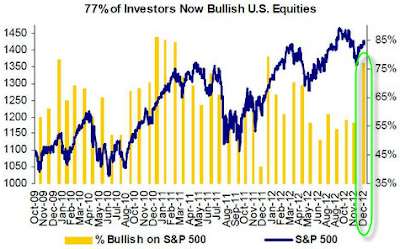 Next up is a longer term perspective showing the history of world GDP. It is lost on most of the current market participants, but today's "developing" nations such as China (red) and India (pink) dominated the world economy for centuries in the past. They are not an up and coming force, they are just re-taking what was previously theirs.

The following shows median household income in the 21st century. While nominal growth has risen (red), the real rate of income growth in comparison to the rise in the cost of living (Consumer Price Index - CPI) has flat lined and recently plunged, now down 9% in the new century. I will provide an entire article devoted to this chart's impact on the price of real estate in the future.

The following shows the real estate price decline (blue) vs. stock price decline (red) in America since the depression began in late 2007. The impact of the real estate decline is felt far more on the average American since close to 70% of the nation was a homeowner at the recent peak. Far more capital was bet on real estate (since most homes were bought with debt) vs. stocks. Therefore a 30% decline in real estate, assuming an average home price of $250,000 at the peak, cost a family $75,000 in paper wealth. Assuming they owned $30,000 in stocks saved through their 401k, the 10% decline from the peak has only cost them $3,000 in paper wealth. This illustrates the urgency of both the Federal Reserve and the government in blowing real estate prices back up to artificial bubble levels. 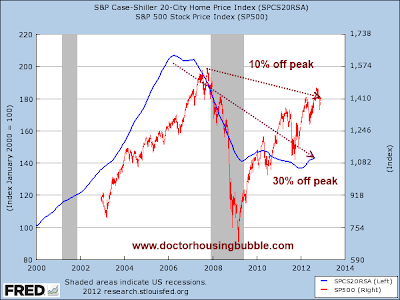 Another great look at the taxing vs. spending problem and which one is more important. The left chart shows the current unfunded spending liabilities on the left and the proposed tax hike "solution" to these problems on the right. Without using a calculator and eyeballing the situation, I hope you can quickly determine how much the increase in taxes will help. Give this to a 6th grader and see how quickly they can solve the problem. (Hint: reduce the size of the bar on the left). 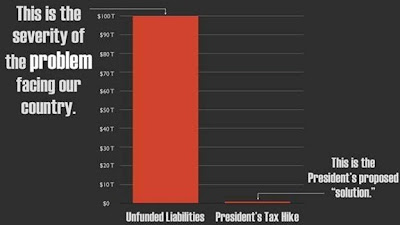 If you need some help with the graph, I can provide the cliff notes version: 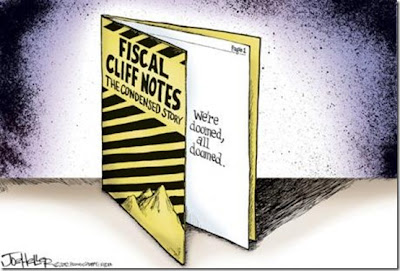 Far more important than the ridiculous fiscal cliff discussions is the coming debt ceiling hike. Not because any meaningful spending cuts will ever be implemented, but because the size of the next debt ceiling raise will help us determine the near term outlook for the price of gold. The following shows the two tracking each other perfectly all the way up: 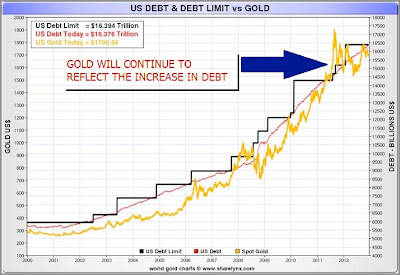 Earlier this weekend I discussed how the new Evans Rule will impact future monetary policy in How Those Giving Up Looking For Work Will Impact The Gold Price. A headwind to the recent decline in the unemployment rate may come from small business hiring. The NFIB small business optimism index experienced a cliff diving plunge in the most recent survey. 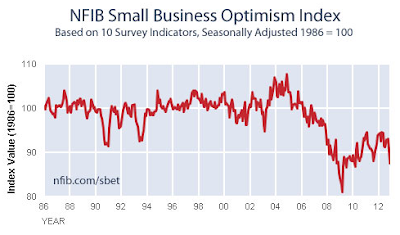 In addition, small business earnings have fallen through almost all of 2012. The Obamacare tax changes, which I have discussed in the past and will focus on more moving forward, will only add another reason not to hire additional workers or cut the hours of the ones already in place. 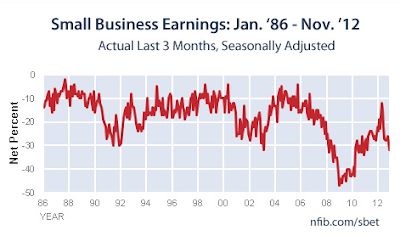 As promised, I want to keep you abreast of the steady decline of Japan as they lurch toward their coming debt crisis, the real black swan (not the fiscal cliff) flying down the train tracks toward the global economy. Japan's GDP growth was revised down to -.1% in the second quarter and their third quarter GDP saw a decline of -.9%. These two consecutive negative quarters officially puts Japan back in recession. Buckle up, because when this baby blows it is going to make Greece look like a walk in the park. For much more on Japan see Kyle Bass: The Global Economy, Japan, & Why He's Buying Mortgages.