I want to review a couple excellent charts from Bianco Research that provide another excellent glimpse into the sentiment toward the stock market today.

The first chart shows the percentage of financial newsletter writers that are bullish (believe stock market is going higher - green line) and those that are bullish but believe we will have a brief 10% correction before rising to new highs (blue line). They currently represent 47% and 27% of all writers. 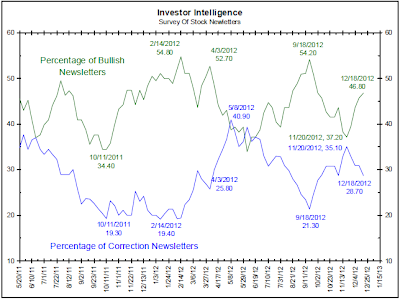 The next chart shows the other category, the bearish newsletter writers (they believe market is going lower). This is the chart that is very interesting. You can see that the number of bearish writers surged during the summer of 2011 when the market fell significantly during the debt ceiling discussions. Since then the number of bearish newsletter writers has plunged and not budged since. 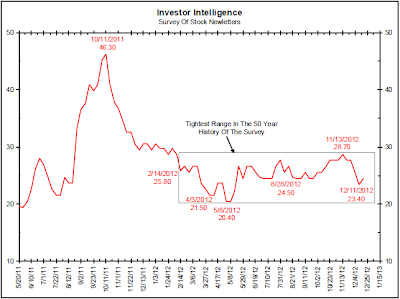 The market has had a few significant sell offs since the debt ceiling fiasco. Normally during these times you see the number of bearish letters rise and then fall again after the market resumes its climb. This had not taken place over the last 18 months.

Bianco notes that the bearish letters are in the tightest range in the 50 year history of the survey. The normal "temporary/reactionary" bears have left the building, and it appears they are not returning.

The market now has full faith and credit standing behind the Federal Reserve. The market believes that QE will always push stocks higher, and it believes that any correction will only lead to a larger QE program that will artificially push it higher.

This new paradigm has created one of the most dangerous market environments in history. Printing money has no fundamental increase on the value of stocks, in fact it is the exact opposite. For an in depth discussion on why this is the case please see The Dark Side Of QE: The Next Chapter In Our Story.

Let's look even further into the second bearish chart above. There are a select percentage of bearish writers that have not budged during the most recent artificial push upward. This group is normally called "perma-bears, chicken littles, or broken clocks" during market moves higher.

I am currently part of this group. I have been bearish on American stocks since I penned the first article on this site in August 2008. For the first six months of writing people assumed I was "correct" as stocks plunged 50%. Since then people have assumed I have "wrong" because stocks have rallied for years off that low.

Will I be bearish on stocks forever? Of course not. I can't wait for the day when I can sell precious metals and select foreign stocks to invest in American business. I wish it was tomorrow.

I believe that American stocks are overvalued today based on the price of the stocks weighed against the backdrop of both the American and global economy. I will go into this subject in great depth during the coming 2013 outlook, but for now I will try to sum it up in just a few sentences.

The total credit/debt of the United States has grown from $1 trillion in 1971 to over $54 trillion today. During that time the size of the economy has grown to about $16 trillion. The fundamental, underlying, debt servicing method to pay off debt is the income of the workers within that country. The median income has stagnated for decades and has fallen significantly since the current depression began back in 2007. 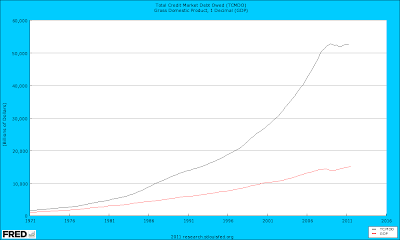 A visual look at income and net worth: Click for larger image.

So what would it take for me to become bullish on US stocks?

The total debt would have to be written down significantly. This would allow the country, which is currently drowning in debt at every level, to have a solid foundation for growth. The second option would be to have real unemployment move back to a healthy level (under 5%) and income levels to increase by about 200% to allow the ability to service the current debt load.

Or.....stock prices would need to collapse to reflect the current reality the country faces. If stocks moved down to 4000 to 6000 on the DOW it would mean that the current economic environment would be priced in. P/E ratios would have moved back down to single digit levels creating undervaluation in the stock market.

I can't wait to be a part of the future perma-bull club. The "crazy" people.

How long will this take to resolve? When will gravity finally hit? I have no idea. I will be bearish on stocks for as long as they are fundamentally overvalued. If stocks are overvalued for the next 20 years then I will stay bearish for 20 years. I assure you I will never "give in" to the euphoria of the market of media around us. It does not matter if stocks rise by another 10%, or we have a fiscal cliff resolution, or the Fed announces QE4. All three of these headlines fundamentally lower the value of stocks further. The country actually going (and staying) over the fiscal cliff is the best thing for America in the long term.

There will be a day (I consider myself fairly young so I hope I see the day) when this site is focused on investing in stocks and real estate.  It will be a lot more fun at that point, but investing in those assets will take a new set of tools (especially real estate). I look forward to the day when we can sell precious metals (at an overvalued price) and invest in a country (or world) worth investing in (at a discount).