Why Most Investors Will Lose Money In Every Asset Allocation

A main argument for higher stock prices moving forward in the US is that the average American household has not participated in the rally. The following excellent chart from the Wall Street Journal shows the price of the S&P 500 since 1987 (orange) vs. the percentage of household assets in the stock market (blue). 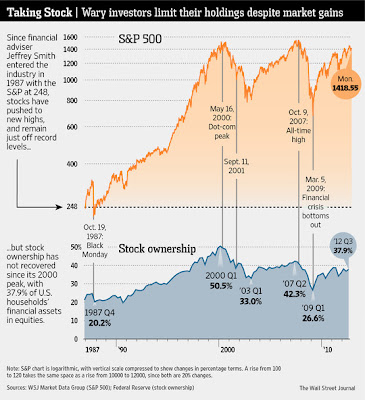 I want to discuss this concept for a moment because it is both often discussed and important to understand. To begin, this chart does not go back to the beginning of the most recent secular bull market in the early 1980's. Stock ownership was even further below the 20.2% bottom shown on the graph in 1987. The bull market was already 5 years in at that point so investors were already beginning to tip toe in.

A major reason for the move into equities in the early 1980's was the creation of the 401k program. This made investing in stocks a new way to "save" for retirement that had tax advantages. It opened the door to a much larger portion of the country which did not participate in the market in the past.

It is also important to briefly point out that the 1987 "bottom" in ownership on the chart was just after the 1987 crash. You can see that as the market rises more average investors enter, and as the market falls/crashes, more sell.  This is known as herd behavior, a topic discussed here often. The public is always positioned for the most possible damage at the worst possible time and is usually not in the market at bottoms (at this moment in time this is occurring in the bond market as the average American household has put the majority of their retirement income into the "safety" of bonds at the absolute peak of the market - they will soon once again be slaughtered).

Many discussions you hear that takes place on the relative value of stocks concerns the percentage of money moving back and forth between bonds, stocks, and real estate. For example, in the first quarter of 2000 we will assume that Americans had:

As real estate prices moved higher and stocks fell leading into 2002 it created the next transition. We'll say that in 2006 Americans had:

These are estimates used to provide an example of what I'm talking about - not actual data (although I'm using the stock data from the WSJ above as reference).

So now a financial advisor looks at the above numbers and says that it is a good time to purchase X because he believes that money will be moving toward that asset market from one of the other asset markets and it will push that asset price higher. For example, he'll say that "money will move out of bonds and go back into stocks."

This analysis misses a critical piece of information and it is why most investors will be hurt bad in the years ahead.

Imagine that you lived in Greece in 2009. You sit down with your financial advisor and have this same conversation using the same percentages above. What happened to the markets in Greece?

They were all destroyed. Point out which graph below you would like to have been invested in.

Those that moved into the "safety" of the bond market were hurt the most. Greece 2 year government bond prices - higher yields (rising chart) means lower prices: 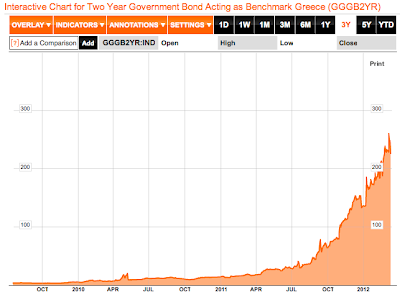 Why did this happen?

Because money did not move back and forth between the three categories - it left the country completely. Capital fled Greece at every asset location when their government debt crisis hit.

This is the new normal for investing in the global economy. If your country is bankrupt and has not yet entered its sovereign debt crisis - France, Japan, the UK, United States, your money is not safe in any of the "big 3" investment options.

Money will move to where it is treated best. Over the next decade I believe that will be in commodities and emerging markets with strong balance sheets (simultaneously creating stronger currencies). The current bizarre landscape where more government spending and money printing leads to more capital entering the country (see the United States) will reverse.

This is the exact opposite of almost every financial forecast for the future, and it has been the blue print for the future here on this site since governments around the world nationalized the financial system and backstopped these paper government promises with a printing press back in 2008.

Look for Japan to be the first major tremor to hit. Pay close attention to how capital will leave the country at every asset (stocks, bonds, real estate). Greece has provided the blue print - make sure you are paying attention.