The commercial real market is composed of the following four sectors:

Of those four it has been the multifamily sector that has seen the greatest surge in capital inflows since 2009. We will get to that sector in a moment, but I would just like to briefly review some of the other markets that have also become extremely frothy.

For a complete and easy to understand walk through of how commercial real estate prices are calculated and cap rates please see 2012 Commercial Real Estate Outlook: How Prices Are Determined.

The following cap rates come from the CBRE survey in August of last year (their most recent data). I will update the data when their new survey is released. It shows that the hunger for properties has been concentrated significantly in A+ stabilized properties. Investors are willing to pay an enormous price for assets they believe to be the safest and highest quality. How steep a price? The following is just a sampling:

Commercial real estate cap rates have historically trended in the 7% to 15% range with 10% being the historical average for property. Sit back and buckle up because I saved the main event for last. Let's look at the return investors are willing to receive in order to purchase apartments in select cities today:

These numbers are staggering. The average cap rate for class A stabilized multifamily housing across the country is 4.6% in urban locations and 5.2% in suburban locations. In many areas, the price of apartments is now greater than it was during the peak of the mania in 2007 and surging higher at a relentless rate.

Let's run through a simple walk through that takes this conversation one step beyond where we went during the in depth 2012 commercial real estate outlook. Lenders look at a tremendous amount of information before deciding whether or not to provide a loan but one of the most important is something called the Debt Coverage Ratio. In simple terms, this means how much cash flow a property generates after all expenses are paid (including the mortgage costs)

Let's say that an investor purchases a class A apartment building in Boston for $30 million. He determined this price using the current market cap rate of 4%. 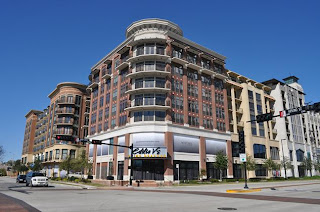 This investor has the ability to finance the property with a 4% interest only loan at today's incredibly low rates. He puts down 20% to purchase the building ($6,000,000), meaning that he will finance the remaining $24,000,000.

This allows us now to see his full annual cash flow.

This also provides him a healthy Debt Service Coverage ratio of 1.25

Commercial real estate loans are given on 5 to 10 year terms. We'll say that the bank decided to finance this loan at 5 years. During that time he has done a pretty good job managing the property and the apartment market fundamentals continued to approve. We'll say that he was able to increase his total NOI by 10% bringing the total NOI to $1,320,000 annually.

He heads back down to the bank to refinance and plans to pull out all the additional equity he added to the building with the increased NOI. He has dreams of buying a new house on the water and maybe a beautiful boat to go with it.

The bank congratulates him on managing the property well but tells him that unfortunately one thing has changed since he purchased his building 5 years ago: interest rates have risen above the 4% level. They are now up to 6% for commercial real estate loans. Just a small 2% rise can't be so bad, right? What does this mean for his refinancing?

For his $24,000,000 loan there is now $1,440,000 in debt service. This means that his $1,320,000 annual net operating income does not even cover the cost of the debt. He quickly understands that there will be no new home on the water and there is no new boat. He will have to pull $6,400,000 from his personal funds just to try and keep the building. If he does not have the funds then the property is gone. The 20% that he sunk into the building, and the 5 years of hard work managing the property have now led him to a potential bankruptcy.

Can you see now why the low interest rate and cap rate environment have created a temporary and artificial surge in the commercial real estate sector? Just as they did back in 2004 - 2007, investors always assume that cap rates and interest rates will continue to fall allowing them to unload the property onto the next buyer.

When rates rise, the buyers today will be trapped inside these properties. The losses ultimately will once again fall on the lending institutions making the ridiculous loans at the current interest rates and prices.

We will now take the conversation global and look at how the ultimate resolution of the sovereign debt crisis will unfold:

Up Next: 2013 Outlook Part 9: Chapter 2 Of The Sovereign Debt Crisis