I covered this topic extensively in 2009, but it is a good time for a quick review with everything that is taking place in Cyprus. People assume in the United States that their money in the bank is completely safe as long as they hold it in an FDIC guaranteed deposit.

The following graph shows what the FDIC has in reserves (blue line) to back the deposits (red line). It shows that if there was a major bank failure or just a small fraction of the reserves were removed, the FDIC would be out of money in minutes. 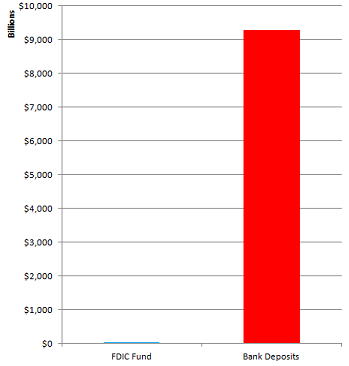 The actual totals are over $9 trillion in deposits and less than $25 billion in capital at the FDIC. At a point in 2009 the FDIC actually had a negative capital base, which made this story even more laughable (they borrowed from the federal government to stay alive).

If the United States ran into a Cyprus situation (which they will), 3 things would need to occur for an American to get their money out of the bank:

1. The FDIC would need to agree to back the deposits. We just discussed that they actually have no money so they would immediately place a panicked phone call to the federal government.

3. The Federal Reserve would need to agree to print the money to back the federal government. How much would they need to print? $9 trillion as shown above to cover the deposit base.

The following chart shows that the Fed has monetized over 50% of the United States debt since 2009. They are on pace to monetize over $1 trillion this year, which will be more than the entire annual deficit.

Remember that if you lend your money to the bank, due to the fractional reserve banking system, that money is immediately removed from the bank and lent out. The FDIC guarantee allows banks to be completely reckless with the deposits.