How To Short Japanese Yen & Government Bonds Through ETFs

I have spent a large amount of time over the last year writing about Japan and the crisis that I believe is coming for their country. For those that need a review on the fundamentals why this crisis will occur, I highly suggest you review the link at the bottom of this page.

Whenever I discuss Japan the first question or comment I receive on the topic is "how can an individual investor can profit from the coming crisis?" Today we are going to move beyond the "why" in Japan's coming crisis and look at both how I believe the process will play out and subsequently how investors can both prepare for its arrival and potentially profit from it.

The government debt crisis in Japan is going to be different from the crisis we have observed in the European Union over the past 3 years for one very important reason: Japan has a central bank that stands ready with no political hindrance to unleash an unlimited amount of printed money to purchase assets in their capital markets.

As a brief review, the opposite has recently occurred in Europe as the yields on the government bonds moved higher as investors knew that their central bank did not have explicit authority to enter capital markets and buy bonds to push yields back lower. This allowed speculators who in many cases have close to an unlimited amount of leveraged purchasing power in markets over the short term, especially through the derivatives market, to push bond yields higher (this is a topic beyond the scope of this discussion).

This meant that a hedge fund, or group of hedge funds, could enter the Credit Default Swaps (CDS) in Greece and cause the cost to carry insurance on Greek debt to rise significantly. This would trigger panic in the Greek bond market where they had laced an enormous amount of short positions on their debt. They would then push as hard as they wanted on both markets (shorting both the swaps and the actual debt) to push the markets lower and create a feedback loop.

The European Central Bank had to stand back helplessly and watch this occur, and the hedge funds knew this, which is why the crisis began first in Europe - a crisis which has significantly helped Japan as attention was diverted away form their own balance sheet disaster, which we will come back to in a moment.

They soon moved pass Greece once the blood was in the water and began attacking the government bond markets in Portugal, Ireland, Italy and Spain. This caused their bond yields to rise and provided speculators with enormous profits. Once again the European Central Bank was forced to sit back and watch helplessly, like a chained junk yard dog that watches the criminals loot the junk site.

Please understand that I am not saying that Greek government bonds were, or are today, worth anything close to full value. The same applies to Portugal, Ireland, Spain, and Italy. The speculators would have been correct in shorting the debt on a fundamental basis even if central banks were not part of this discussion.

Because the watch dogs, the central banks in both these countries, have no leash. If a speculator enters their markets and dares short government bonds they have promised an unlimited amount of printed currency to keep their bond yields lower. The gun is pointed at the front door daring a brave sole to enter. So far in this story no one has.

The following shows the 10 year Japanese government bond yield for Japan from March 1990 to March 2013. Yields have fallen from close to 8% to .62% where they stand today. Yes, that is a decimal point on the current yield. Investors today are willing to give the completely bankrupt Japanese government their money for 10 full years at .62% per year.

On the opposite side, yet equally important to this story, you have their currency the Japanese yen. The following chart shows the yen U.S. dollar exchange rate over this same period, March 1990 to March 2013. It has fallen from 160 to 95 where it stands today.

So how will this story play out?

I believe that in the end both the yen and the government bonds will fall significantly in value. It has been my estimation over the last year that the central bank would focus on devaluing their currency to boost their export market as well as "stand ready" to unleash an unlimited amount of firepower into the bond market in order to keep rates low. This would cause their currency to fall in value before we saw the movement in the bond market (the opposite of what occurred in Europe as the bonds led the currency lower).

This is exactly what we have seen take place so far.

The problem is that the central bank cannot keep both their currency high and bond yields low. As they create new currency to purchase bonds it creates a surge in the quantity of yen available in the market. Those familiar with basic economics know that all things equal a larger supply ultimately ends with a lower price.

When investors asked me how to play the situation I responded by saying that you should focus your investments on shorting the yen first and then slowly layering your positions in on shorting the bonds. I still agree with this thesis but with the following caution in place:

The Japanese yen has already fallen by close to 20% over the last 6 months, a huge move in the currency markets over such a short period of time. Some investors have already begun to put the larger picture together, and they have sold their yen position. I do not like to enter markets after a major move up (or down if you are shorting), and I do not like to enter a trade when sentiment is high toward it. Both are the case as of this writing toward shorting the Japanese yen. That does not validate the long term view I have of the currency, it is only a caution flag for those looking to enter at this moment. Here is a close up view of the chart above highlighting the recent move: 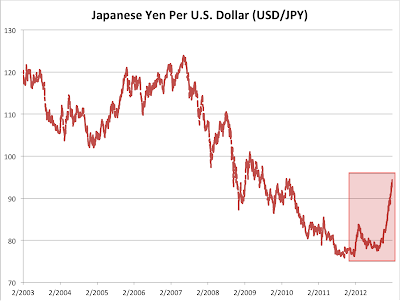 There are two ETF's available today to bet against these markets:

Shorting Japanese government bonds has been a losing trade for over 20 years. It has been dubbed "the widow maker" in the investment community. Can the bonds move lower from here? Of course they can. Hypothetically they can move to 0% as the central bank has the ability to purchase every bond on the planet. Hyperinflation would arrive before they had the ability to do that, but it is "hypothetically" possible.

My guess is that you will see the currency markets move first (which may already be in the process of happening with the recent 20% decline). Once yields on the Japanese government bonds finally stop falling and then reverse, it is lights out for the bond market as interest expenses will instantly overwhelm all revenue.

For a review on why this collapse is coming please see:

For an understanding of how Kyle Bass is putting on this trade in the derivatives market (and how it differs from what the average investor is capable of doing, which is very important to understand) please see:

Kyle Bass On Japan & The Best Investment You Can Purchase Today

I am not an investment advisor. Please speak with one before making any investment decisions.