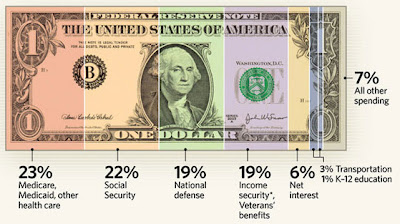 You'll notice there is really only 10% available for discretionary spending cuts. 90% of the spending is mandatory, unless you consider military spending discretionary. If you cut 50% of the military budget, which would obviously never happen, then you have 80% of the budget that is untouchable. The following puts some perspective on U.S. military spending (dark blue) vs. the rest of the world combined. 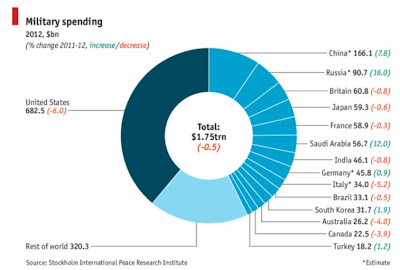 I believe that defense is the most important function of the federal government. In a better world, it would be one of the only functions of the federal government. This in no way defends the current bloated and obscene defense spending taking place today, which should be (and ultimately will be) drastically cut. It only puts the other ridiculous spending on social transfer payments into perspective.

Food stamps this past month have once again crossed new record highs as 23,087,886 Americans now collect, while the monthly payout (red line) has fallen to only $274 per household. 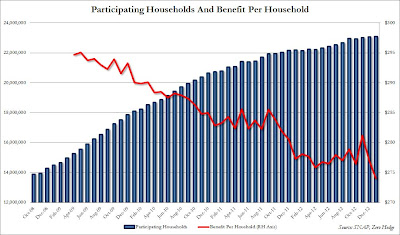 I discussed a few weeks ago the staggering growth of disability payments in The New America: It Is Better To Collect Disability Than Take A Job.

The US federal government today borrowes money at essentially no cost or interest allowing them to borrow an unlimited amount with no consequences. The only argument that takes place today is how much more should be spent and printed. This is of course lunacy, and it will change. This is the last debt fueled bubble.

Watch closely what is about to take place in Japan because it will provide the blue print. Their coming melt down will revolutionize the way modern economics is taught. 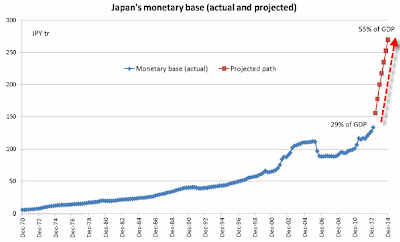 United States & Japanese stocks are surging on the artificial government spending and central bank printing boost, but the rest of the world is beginning to reflect the true economic realities taking place in the data. 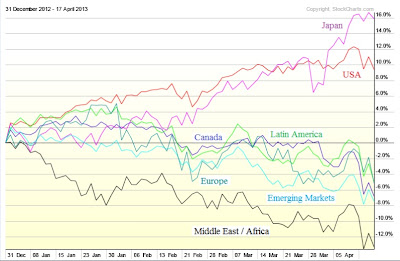 Remember that if the new stock market highs are removed, all you have remaining underneath is reality. 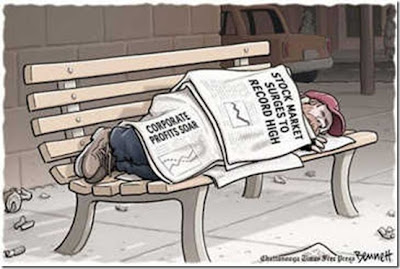 I have discussed the success of Iceland in detail in the past, see Cyprus Has A Better Option: Default, Devalue, & Depression, but for more reading on countries that have decided not to spend and print as much as possible and their economic results see the following excellent article from Forbes: