Japanese Stocks Crash: A Small Taste Of Things To Come

Last night the 10 year Japanese government bond touched 1%, more than doubling in just a few short months. This means the value of the bonds have plunged because bond values fall as yields rise. Here's a great visual of their bond prices, currently in free fall: 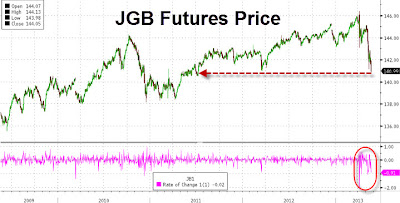 Japanese yields rising create an unlimited amount of problems which have been documented here in detail; from banks, pension funds, and Japanese citizens taking massive losses on their books all the way up to the simple fact that when yields reach about 2% in Japan the interest on the debt alone will overwhelm their entire annual tax receipts.

In addition, higher yields create higher borrowing costs for consumers and businesses. At some point last night those that invest in the businesses in Japan through stock purchases figured this out as the Japanese market plunged 9%, ending the session with a 7% decline. 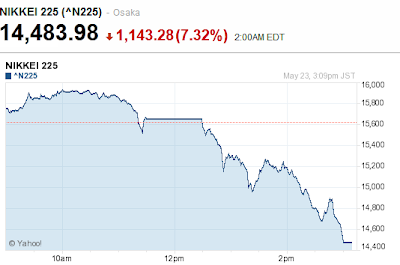 As all markets are interconnected in today's financial world this has rippled around the world because many investors borrow (short) the yen to buy all types of assets (global stocks in particular), the hottest most recently being Japanese stocks which have been on a tear for close to 6 months.

I have no idea if this is the beginning of the end, but this is a perfect preview for how the endgame will play out during the second half of this sovereign debt crisis. At some point bond and currency markets will overwhelm the current artificial fairy tale that central banks have tried to create. Then you will see all risk assets plunge simultaneously as people realize that the dream world the central banks created is actually a nightmare.

For more on the recent bond market plunge in Japan see: