2013 Second Half Outlook: The Great Rotation Meets No Other Alternative

The main headline entering the start of 2013 was "the great rotation." It was so pervasive in every mainstream media and financial advisor headline that it was drowning out almost everything else. The great rotation meant that after four long years of retail investors moving money out of stock funds and into bond funds that this process would slow, or even reverse, providing the next catalyst upward for the stock market.

Financial advisors present the world of investing in a vacuum. Here is the standard approach provided:

Here is the justification for this approach, which I am sure you have also heard:

"This diversification provides you protection because historically when stocks fall, bonds perform well, and when bonds fall, then stocks rise. Over the past 32 years U.S. bonds have increased in value in an almost perfect straight line. U.S. Stocks, which have seen their dips, are now at new all time record highs. Anyone that bought stocks or bonds during any dip over the past 32 years is now wealthier today."

If someone were to ask my advice, which I usually never provide unless I am specifically asked, I ask a simple question (the same one I asked during the Outlook to begin the year):

What would happen if both stocks and bonds fell simultaneously?

This question will either seem confusing at first, hopefully in a good way, or perhaps make them upset and defensive. If they become defensive then the next quote is the one we have heard almost every day since the year began from the mainstream financial news and financial advisors across the country when discussing stock purchases:

"There is no other alternative for income."

I discussed this topic in length just two weeks before the stock markets topped in:

Why Buy Stock? "There Is No Other Alternative For Income"

There is an alternative to buying stocks or bonds, but the financial advisors are correct in that it provides no income. The alternative is cash, which was the most hated investment class on the planet until about 6 weeks ago.

Since the spike in bond yields (and plunge in value) a few weeks ago, money has flooded out of bond funds at a record rate, which can be seen in the chart below. Bond funds have experienced $23 billion in withdrawals in the latest week and $58 billion over the past 4 weeks. 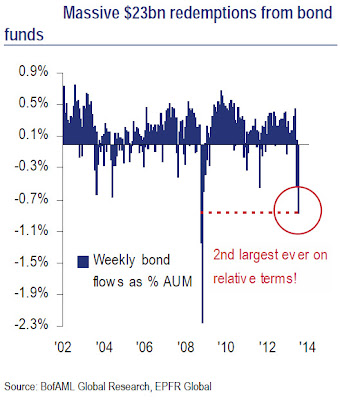 This was the scenario called for by market prognosticators to start the year which would usher in the great rotation. Investors then turned to the stock market fund data to cheer on the huge inflows. The problem is that what they found was $13.1 billion removed from equity funds in just the last week.

Stocks and bonds were falling together.

So where did the money go? Cash. Money market funds have experienced huge inflows since the wreckage has begun.