2013 Second Half Outlook: How Rising Rates Impact The Overall Economy

The Federal Reserve's number one goal in printing money to purchase bonds is very straightforward: to lower the interest rates on those bonds. The term is known as Quantitative Easing for good reason in that it eases the burden of debt payments for future borrowers and increases the value of debt for those that currently own it (as bond yields fall the underlying principle value of the bond rises).

There is a secondary stimulative effect on the economy as a whole when interest rates fall, which we have experienced over the past 5 years as the Fed has continued its relentless barrage of printing money to purchase debt, driving rates lower and lower.

Rather than review all the positive impacts of QE as interest rates fall, we will now review what would happen should the process move in reverse because it is possible that the 10 year rate of 2.5% (where it is today) is not the ultimate ceiling.

The first thing that happens when rates rise is that new debt becomes more difficult to pay because the monthly interest payments to borrow are greater. This both discourages borrowers from taking on new or additional debt as well as triggers higher costs for debtors that have short term refinancing needs on existing debt.

70% of the United States GDP is based on consumption. Consumers have only X amount of dollars per month to spend based on their income. If the total amount they pay on interest rises, they then have less per month to consume.

Corporations have had the luxury during the past 5 years of obtaining money in the debt markets with record low financing costs. Higher interest payments on this debt provides less total profits, less money available to grow, creating a lower rate of hiring.

These first two groups, individuals and corporations, feed on each other. If consumers are spending less, then small businesses who rely on that consumption grow at a slower rate. They hire less or lay off workers, who then spend even less. It is relentless feedback loop.

At the next level you have government debt. The U.S. federal government has had the ability to run enormous deficits due in large part to the fact that their total interest burden, even with the total debt skyrocketing, has been very small. With most of the federal debt financed short term, if rates were to rise and this debt were to rollover at higher rates, then the total burden would mushroom. This would then spark additional fear in those that invest in government bonds causing them to sell and rates to go even higher. It becomes a relentless feedback loop.

Real estate prices, which we will discuss in detail in a coming section, are negatively impacted by interest rates rising. This has repercussions on the entire economy, from the wealth effect of individuals and their propensity to spend, to bank balance sheets, to state and local tax revenues which are tied in large part to the real estate tax coffers.

State and local governments are massively in debt with a large part of their holdings short term like the federal government. If both real estate prices and their local economies shrink due to the individual and corporate feedback loop just discussed, then their tax revenues will shrink considerably as a result. This would come at a time that the cost to service their debt is rising. If investors become spooked, they will sell debt and rates will rise further, creating another vicious feedback loop. 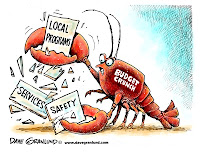 I hope this simple walk through of some of the largest areas of the economy paints a clear picture on what would unfold should interest rates rise. Hint: Something Very Bad.

This feedback loop is what Bernanke fears most. It is a deflationary spiral that is very difficult to reverse once it begins. This is why he has kept his foot full throttle on the QE pedal since the financial system disintegrated in 2008. The Fed has become the financial system. The first and only buyer of last resort for treasury and mortgage debt.

The problem is that the markets have now become dependent on interest rates falling forever in order to continue the current artificial growth. If they reverse, then it is game over.

Bernanke has painted himself into a corner. This is why QE will never end. It is not possible for it to end. We have moved so far over the cliff that the reversal of rates from here will shatter the markets and the economy.

While I could discuss an almost endless amount of ways rising rates will impact the global economy, we'll be taking a more in depth look at specific asset classes.

Up Next: 2013 Second Half Outlook: Why The Fed Can Never Exit