To begin the year we walked through a large case study of what would happen if the most important financial instrument on the planet, the 10 year treasury yield, experienced a rise in interest rates. At the time it seemed ridiculous to consider the 10 year treasury yield the crux of the entire financial system or to consider that a rise in rates could really impact every asset on the planet. If you have not, I would review the 2012 Outlook before we begin because it provides a good basis for this discussion:

The 2012 Outlook: A Case Study On Rising Interest Rates

Last month something interesting happened in the financial markets. The "hypothetical" case study of rising interest rates became a reality. The 10 year treasury yield launched from under 2% to over 2.6% in just a few weeks. This move in rates created a massive dislocation in the financial system, impacting almost every asset class around the world and sending some of them into a complete tailspin. 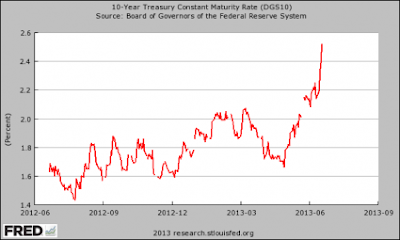 Most participants in the market, specifically the mainstream media, look at what is happening present day in the financial markets and then write stories to justify why the markets moved on that day's news.

It is natural human psychology to want the "justification"of events after they happen, which is why mainstream news gets such a strong following. It is also why investors making investment decisions on today's market news almost always get hurt over the long term. It is similar to driving while looking in the rear view mirror.

June's movement in the markets, specifically the fall of stocks and bonds simultaneously, caught almost everyone by surprise. We will discuss why market participants were surprised in the sections ahead, and we will review what rising rates from here (should they "hypothetically" occur) would mean for both the global economy and financial system.

Up Next: Second Half Outlook: How Rising Rates Impact The Overall Economy