Jim Rickards, in the video below, discusses the currency movements taking place in many countries around the world such as India where the central bank feels helpless at the moment and in Brazil where it appears the central bank has regained some control of the market.

The following chart shows the recent devaluation in the Indian Rupee which is now in free fall against the dollar. The process of capital flows reversing out of the country began the moment when the "taper" was mentioned by Bernanke. Since March of this year, the Indian people have lost 30% of their purchasing power/wealth (those that converted their paper into gold have seen their wealth skyrocket). They have lost 15% in the last 21 trading days and almost 3% in yesterday's trading alone. The speed at which the tides can change for a citizen's savings are mesmerizing. 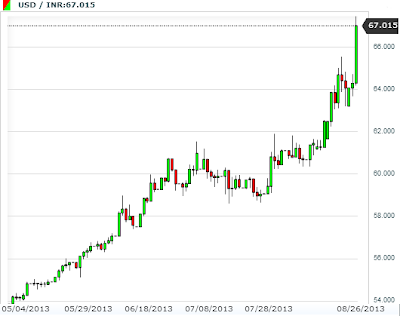 Rickards feels that some of the emerging markets have the potential to spiral into a type of currency crisis last seen in 1997 with the Asian debt crisis.

To understand why the Fed will soon reverse the tapering and why they will never actually sell bonds into the market see: Why The Fed Can Never Exit