Reinhart & Rogoff Are Correct: Another Walk Through The World Of Common Sense

The mantra that "government spending is good for the economy and austerity is bad for the economy" has been relentless and incessant since the Reinhart & Rogoff 90% debt to GDP debate broke out in April of this year. I commented on this topic during the initial hysteria back in April in Using Common Sense Instead Of Economic Text Books

I was expecting this conversation to die down and some form of rational thinking to enter the discussion, but unfortunately it has not. It breaks my heart to know that college students are paying their universities $50,000 to $100,000 a year to receive economic poison for their minds. I came across the following article this morning from an economics professor and an undergraduate student at the University Of Michigan titled After crunching Reinhart & Rogoff data, we've concluded that high debt does not slow growth. People will be able to look back years from now and realize how stupid this statement is, but in our current market atmosphere after reading headlines like that over and over and over again, I think regular people on the street are unfortunately starting to believe it. I know that regular readers of this site can easily brush aside such nonsensical statements, but we'll review the topic very briefly here again just in case anyone is starting to get nervous that common sense no longer applies to the world of economics.

The article above reminds me of the research that was written back in the mid 2000's regarding mortgage loans. At the time, the top researchers from both Wall Street and Academia "proved" that mortgages were safe because a history of data points said so. They had 50 years of data showing a steady and continuous rise in home prices combined with 50 years of data showing that the default rates on mortgage loans were extremely small.

Now think back to that time, before the crash, what someone might think reading a paper like that with fancy graphs coming from a professor. We know now that the reason there was no trouble in the mortgage market was the irrational psychology around the purchases of the debt. Mortgage debt was in a bubble. It was only when the psychology around the safety of these mortgages changed just slightly that the entire house of cards came crumbling down, and their data sets were thrown out the window.

This is easy to understand looking at it today as we have all heard this story countless times. We look back now and marvel at how every single Wall Street bank and every single academic paper across the country could have gotten it so wrong. 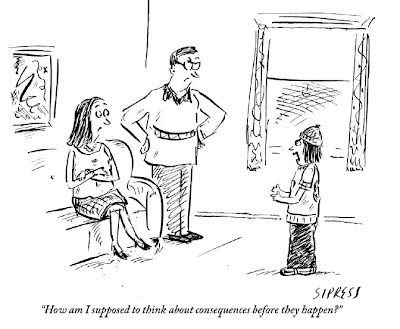 Fast forward 8 years later to today. We are currently at the grand finale of a 70 year debt super cycle and, more specifically, the grand finale of a 30 year global government debt cycle. Investors are paying a price for bonds today (accepting a lower interest rate) that is more out of line with the value of those bonds than any time in the history of the financial system. The current bubble in almost all debt, but specifically government debt, is the greatest and most irrational bubble the world has ever seen.

Does that sound crazy? Here's a quick perspective on probably the first bubble that pops into your head that would easily seem far more irrational: the tech bubble of the 1990's. This was a period when hundreds of start ups across the United States were building Internet companies from their garage, taking them public with no earnings, and receiving astronomical valuations that would double or triple during the first day of trading. Insane? Yes. Completely.

Here is the difference: there was a chance, even if it was just a 0.0001%, that something could occur that would allow these companies to reach those valuations. They could have put together a business plan that could one day become a highly profitably entity.

Looking at the balance sheet of countries today such as Japan or the United States a 5th grader with a calculator can spend a few minutes to see that the debt of these countries will never be repaid at full value. There is a 0.00% chance that it will occur.

The market has priced these securities with close to 100% certainty that their money will be returned at full value. To find a bubble of this irrationality you would have to go all the way back to the tulip bulb mania of 1637. 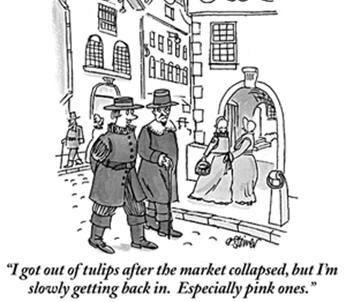 When this mania subsides, which could be this month or it could be 5 years from now, interest rates on these bonds will explode (shocking everyone and destroying every academic model). The additional cost to carry and roll the current debt is going to be combined with the cost to take on new debt in the market. For many countries, the interest payments are going to overwhelm the outflow of capital.

As that capital, which is considered a future stimulus for economic growth and has been priced into every future model, is diverted away from the real economy it will slow growth considerably. Economies now depend on government stimulus more than ever for a large percentage of their annual GDP.  As an example, a very small portion of spending has been diverted away from the countries of Greece and Spain (they are still borrowing and spending with the help of bailouts and the central bank) and their countries have entered depressions unlike anything we have seen in decades.

When the psychology toward government debt changes the prices of these bonds will collapse, and every academic paper and analytic model currently used by Wall Street will become another marvel in the annals of history. They will take their place alongside the subprime mortgage papers written in 2005.

For more on the impact of rising rates see the 2013 Second Half Outlook.