What were the top financial market participants saying at the stock market peak in 2000? 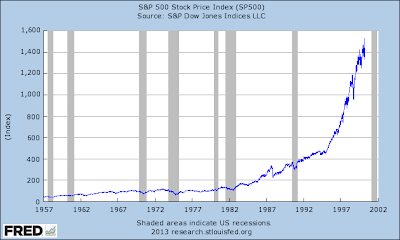 "There has been a paradigm shift." (Translation: "This time it's different, a New Economy!")

"What is dangerous is for Americans not to be in the market. We're going to reach a point where stocks are correctly priced, and we think that's 36,000 ... It's not a bubble. Far from it. The stock market is undervalued." (Warning, don't choke on your popcorn!)

"Some fear a burst Internet bubble, but our analysis shows that Internet companies account for only 7% of the overall Nasdaq market cap but carry expected long-term growth rates twice those of other rapidly growing segments within tech." (The Internet Index lost two-thirds in the next six months.)

"This correction will run its course until the middle of the year. Then things will pick up again, because not even Greenspan can stop the Internet economy." (He's still an economist, hosting his own show.)

"The bottom line is, before the end of the year, the Nasdaq and Dow will be at new record highs." (Later in September he predicted a rally to 12,000 by election day.)
Source: Paul Farrell 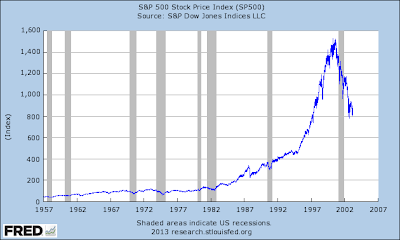 What were the top financial market participants saying at the stock market peak in 2008? 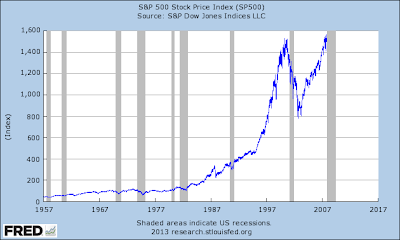 "A very powerful and durable rally is in the works. But it may need another couple of days to lift off. Hold the fort and keep the faith!" —Richard Band, editor, Profitable Investing Letter, Mar. 27, 2008
AIG (AIG) "could have huge gains in the second quarter." —Bijan Moazami, analyst, Friedman, Billings, Ramsey, May 9, 2008
"I think this is a case where Freddie Mac (FRE) and Fannie Mae (FNM) are fundamentally sound. They're not in danger of going under…I think they are in good shape going forward." —Barney Frank (D-Mass.), House Financial Services Committee chairman, July 14, 2008
"I think Bob Steel's the one guy I trust to turn this bank around, which is why I've told you on weakness to buy Wachovia." —Jim Cramer, CNBC commentator, Mar. 11, 2008
"Existing-Home Sales to Trend Up in 2008" —Headline of a National Association of Realtors press release, Dec. 9, 2007
"I expect there will be some failures. … I don't anticipate any serious problems of that sort among the large internationally active banks that make up a very substantial part of our banking system." —Ben Bernanke, Federal Reserve chairman, Feb. 28, 2008
"There's growing evidence that parts of the debt markets…are coming back to life." —Peter Coy and Mara Der Hovanesian, BusinessWeek, Oct. 1, 2007.
Source: Bloomberg
What happened next? 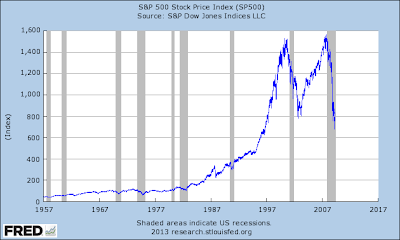 What are the top financial market participants saying today? 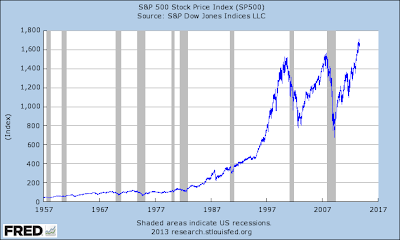 
At the start of the year, Wall Street's so-called "1700 Club," didn't have a single member. But that was before the Standard & Poor's 500 stock index zoomed past 1500 and 1600 on its way to its record-breaking run past 1700 last week.
Today, seven top stock strategists have joined the club, whose membership requirements include being bullish on stocks and owning a 2013 year-end price target of 1700-plus for the benchmark index. All the founding members have boosted prior lower targets to keep pace with the sizzling stock market of 2013.
The club's first member was Tony Dwyer, strategist at Canaccord Genuity. Back in March, he raised his target to 1760 from 1650. (In late July, he expressed confidence in his 2014 target of 1955, a 16% leap from Wednesday's close of 1691, after "busting" some market "myths," including one that says the market is "already up too much," and "it is too late to buy.") Dwyer remains bullish, as he thinks economic growth and inflation numbers are too low for the Fed to start pulling back on its market-friendly bond-buying program this year.
The club's most-bullish member, however, is Tom Lee. On July 26, JPMorgan's chief U.S. equity strategist raised his market outlook for the second time this year, bumping up his target to 1775 from 1715. That equates to further gains of 5%.
Other Wall Street firms that have joined the 1700 Club include Bank of America Merrill Lynch, Goldman Sachs, Stifel Nicolaus, Credit Suisse and Oppenheimer. Of the 17 firms whose S&P 500 price targets are tracked by Bloomberg, 15 have boosted their market outlooks this year, but a dozen still have current targets below 1700.
Lee told USA TODAY that his bullish call is "less about the market's momentum" and "more about the economy's momentum."
Says Lee: "We are seeing signs of a U.S. acceleration." He cites as evidence a better-than-expected July reading on U.S. manufacturing, a drop in the number of Americans filing for weekly unemployment benefits and a decline in the unemployment rate to 7.4%, its lowest level since December 2008.
1700 Club member Savita Subramanian of BofA Merrill Lynch, who has a 1750 target, says the market will be driven higher by a rotation to more economically sensitive stocks, a shift back into stocks by folks who are under-invested and continued economic healing in the U.S.
"Why wouldn't you buy stocks now?" she says. "What is the alternative?"
What happens next?