The following provides a historical look at secular bull and bear markets in the U.S. stock market. It shows the historical trend line for inflation adjusted stock prices going back to 1871. Stocks have been above this trend line, other than a few brief moments in early 2009, since 1996 when Alan Greenspan gave his famous "Irrational Exuberance" speech. Stocks tend to put in secular bottoms and begin new secular bull markets at points well below the historical trend line. 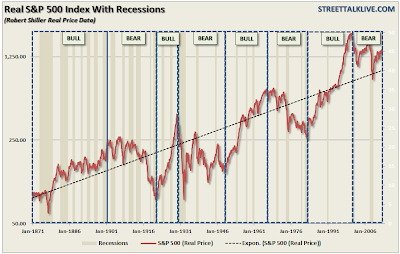 In order to find a true bottom the leverage in the market must be removed, which unfortunately will come in a very violent manner. The following (red line) shows inflation adjusted margin debt at the NYSE, which is now closing in on the 2008 pre-crash highs. The blue line provides a close up of the graph above, beginning at the 1996 Irrational Exuberance moment through today. 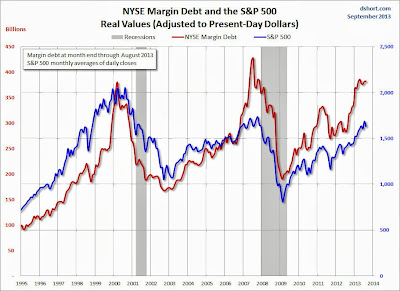 In addition to margin debt, which represent confidence or euphoria in the market, you can look at pure valuation to determine whether stocks are over priced. The next chart shows the 2 year change in P/E multiples, which is the largest two year expansion of P/E ratios since the dot com bubble and the expansion just before the 1987 crash. In simple terms, a rising P/E ratio means investors are raising the price they are paying for stocks faster than the underlying earnings are rising. The rise in stock prices over the last two years has come almost exclusively through P/E multiple expansion. 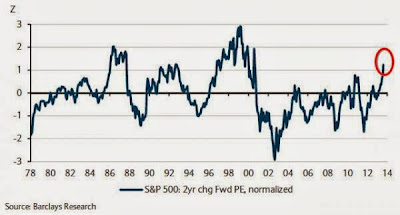 The much anticipated bond sell off which occurred earlier this year was supposed to "rotate" money into stocks and provide the next catalyst for higher prices. As you can see in the chart below, while bonds have sold off stocks have flat lined and tracked sideways. The money leaving the bond market has moved to cash, which I believe is only a preview of what is coming. 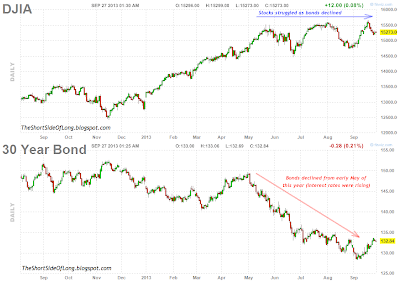 While other parts of the world will face problems of their own, using their markets as a gauge helps to show how far from reality the U.S. stock market has diverged. For example, while the U.S. P/E ratio has moved back up to 23.6x earnings (a level where previous secular bull markets throughout history have peaked), in emerging markets the price to earnings ratio stands at just 13.4x. In simple terms, while earnings may be down (and may continue to fall) in these emerging markets their price compared to the actual earnings the companies generate are much more in line with reality. 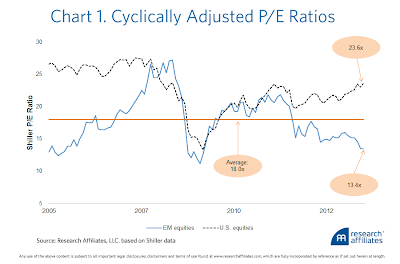 It is my estimate the the P/E graph above will converge again at some point over the next few years. I believe the U.S. multiple will meet the emerging market multiple at a far lower point. What does this mean for U.S. stock prices? They will decline significantly.