The following comes from Peter Schiff at Euro Pacific Capital who provides a succinct overview of what is really taking place with the U.S. debt ceiling drama (emphasis and chart mine):

The popular take on the current debt ceiling stand-off is that the Tea Party wing of the Republican Party has a delusional belief that it can hit the brakes on new debt creation without bringing on an economic catastrophe. While Republicans are indeed kidding themselves if they believe that their actions will not unleash deep economic turmoil, there are much deeper and more significant delusions on the other side of the aisle. Democrats, and the President in particular, believe that continually taking on more debt to pay existing debt is a more responsible course of action. Even worse, they appear to believe that debt accumulation is the equivalent of economic growth.
If Republicans were to inexplicably prevail, and the federal government were to cut spending so that its expenditures matched its tax revenues (a truly radical idea) the country's financial mess would be laid bare. The government would have to weigh the relative costs and benefits of making interest payments on Treasury debt (primarily to foreign creditors) or to trim entitlements promised to U.S. citizens. But those are choices we will have to make sooner or later anyway. In fact we should have dealt with these issues years ago. But generations of mechanistic debt ceiling increases have allowed us to perpetually kick the can down the road. What could possibly be gained by doing it again, particularly if it is done with no commitment to change course?
The Democrats' argument that America needs to pay its bills is just hollow rhetoric. Paying off one's Visa bill with a new and bigger MasterCard bill can't be considered a legitimate payment of debt. At best it is a transfer. But in the government's case, it doesn't even qualify as that. Treasury debt is primarily bought by the Fed, foreign central banks, and major financial institutions. None of that will change with a debt ceiling increase. We will just go to the same people for greater quantities. So it's like paying off your Visa card with a bigger Visa card.
According to modern economists, an elimination of deficit spending will immediately cause a dollar for dollar decrease in GDP. For example, if the government stopped sending food stamp payments to poor people, then grocery stores would lose business, employees would be laid off, and the economy would contract. But this one dimensional view fails to appreciate that the purchasing power of the food stamps had to come from somewhere. The government can't create something from nothing. Taxation transfers purchasing power from people living in the present to other people living in the present. In contrast, borrowing transfers purchasing power from people living in the future to people living in the present. The good news for politicians is that future people don't vote in current elections (and current voters don't seem to appreciate the cost to their future selves of current policy).
The Obama Administration has congratulated itself for turning around the contracting economy that it inherited from President Bush. But even if you take the obscenely low official inflation statistics at face value, we only grew at an anemic 1.075% annual pace from 2009 to 2012 (far below the between 3% and 4% that the U.S. averaged post World War II). Sadly, this growth pales in comparison to the accumulation of new debt that we are borrowing from the future.
U.S. GDP is measured at roughly $15 trillion per year. 2% growth means that each year the GDP is approximately $300 billion larger than the prior year. But in the less than five years since Obama took office, the federal government has added, on average, about $1.3 trillion per year in new debt, a pace that is four times higher than the growth. If the deficit were subtracted from GDP, America would be shown to be stuck in a severe recession that Washington can't acknowledge. But such a reality is more consistent with the dismal job prospects and stagnant incomes experienced by most Americans. 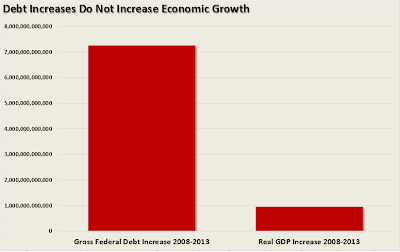 The belief that deficits add to the economy, and that debt can be dealt with in an imaginary future (that never seems to arrive) is the foundation upon which the President can chastise the Republicans as irresponsible suicide bombers. Using this logic, he can argue (with a straight face) that borrowing is the equivalent of paying. That the President can make this delusional argument is not so surprising (no lie too great for the typical politician to attempt). What is alarming is that the media and the public have swallowed it so willingly. As they call for limitless increases in borrowing, Democrats have offered no plan to reduce the current debt and they are unwilling to negotiate with Republicans on that topic. Yet somehow they have been perceived as the party of fiscal responsibility.
While the Republicans have a dismal track record of their own when it comes to budgetary management, it can't be disputed that the minor dip in that rate of increase in spending that resulted from the recent Sequester, happened only because they dug in on the issue. Without the 2011 debt ceiling drama, there is no chance that any spending would have been touched.
Democrats had warned that the $85 billion in sequestration cuts slated for fiscal year 2013 (about 2% of the Federal budget) would be sufficient to bring on economic Armageddon. But guess what? We survived. Recently, Senate Majority Leader Harry Reid continued with such rhetoric by declaring that there are no more cuts to be found anywhere in the $3.8 Trillion dollar federal budget. (Apparently he missed last week's 60 Minutes piece on the spreading epidemic of federal disability fraud.)
We have to acknowledge what even the Republicans haven't fully grasped. We are in such a deep debt hole that there is no solution that does not involve serious economic pain. Tea Party Republicans rightly believe that government spending is a drag on economic growth. As a result, they conclude that immediate spending cuts will help with the "recovery". But they are confusing real economic growth with the delusional expansion created by deficit spending (which is actually damaging the real economy). If they cut the deficit, this phony economy may likely implode and cause widespread distress.
So even though a reduction in government borrowing and spending does help the economy, it won't feel very helpful tomorrow. The more we borrow and spend today, the more we will suffer tomorrow when the bills come due. Ironically, cutting government spending now helps the economy by allowing the economic adjustment to happen sooner rather than later. But this type of long-term thinking is very difficult for politicians to consider.
Unfortunately our debts don't leave us much in the way of choices. We can choose to pay now or try to pay later. But the longer we wait the steeper the bill.