It's hard to believe, but this is my first time discussing bitcoin on this site. Before reviewing what bitcoin is, I will tell you a very sad story, which will simultaneously provide context to this discussion.

I was introduced to bitcoin years ago when it was trading at 6 cents. A paid publication that I read discussed the new product in detail. I chose not to purchase any bitcoins at the time.

Fast forward to today and bitcoin is now crossing 450 dollars. Very simple math shows you how little money I would have needed to invest at 6 cents to make a fortune on the speculation. That is the sad part of the story, and it is very sad.

The context is the why? Why did I choose not to buy?

Bitcoin was designed as an electronic currency to compete with other available currencies, or stores of wealth. Its main draw is scarcity. There is a limited number of electronic bitcoins that were created and available to purchase around the world. New bitcoins can be created, but they must be "mined" electronically, a process that takes the top miners a good amount of time. Therefore, the new supply enters the market at a slow pace and ensures the scarcity factor is always there.

Compare this with the other major competing currencies around the world that are flooding the market with new supply through QE programs and devaluing the currency that already exists. The first group of bitcoin buyers were most likely people that were looking for another safe harbor against that devaluation.

The current buyers, I suspect, are something different altogether. The chart below provides the price movement for the electronic currency. You can see the initial thrust up to almost $250 as the product first gained mainstream awareness and the collapse in price that brought it quickly down to almost $50. It has since regained its footing and is now on a truly spectacular trajectory. 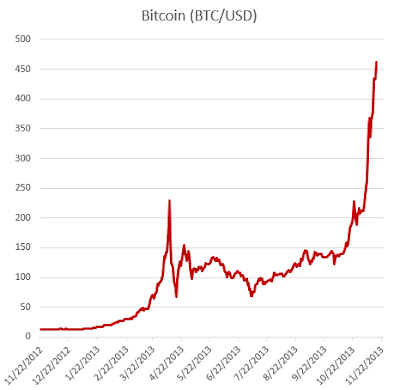 I believe the bitcoin chart above will eventually be used in discussion boards to define what a speculative bubble looks like. It will be put up alongside the tulip bulb mania of 1634 (below).

Part of the discussion in the future will center around the fact that bitcoins have less real world value than a tulip bulb. It is an electronic currency backed by nothing. It was just something thought up and sold to the world. Tulips had value in that at least you could plant them in front of your home. While the rise in bitcoins could end up even more spectacular than what was seen hundreds of years ago in tulips, the collapse will most likely also be greater. Reports are out now that the Chinese (known for their love of gambling and speculation) are entering the bitcoin market with force to ride the speculative wave higher.

The story itself has flair in that the Winklevoss twins (from Facebook) have become large investors, even promoting the currency on television as "extremely undervalued." 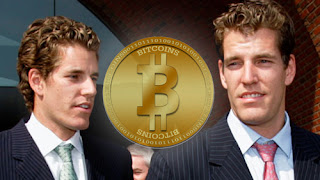 So back to my personal sad story. Why did I choose not to invest at 6 cents?

There is another option for investors who are looking to put their money into a form of currency that cannot be devalued: precious metals. Just as with bitcoins, there is a limited supply available on the planet and it takes years to set up a mine to bring new supply online. Precious metals have the same exact scarcity feature with one important difference; they have real tangible physical form. They exist.

I believe that before this decade is over the silver chart is going to take the form of the bitcoin chart above. The first silver blast off to $50 was the opening act (just as with bitcoin) and the main event is still coming. The fact that everyone around the world would line up to buy an artificial currency at $450 only strengthens my belief that someone out there would want to purchase a physical silver coin (which has represented real money for thousands of years) for $20.

Will I buy some bitcoins if they cross $1,000? Unfortunately, no. I will continue to buy boring physical silver coins at $20 (and hopefully much lower if prices fall) that everyone hates. I enjoy watching the bitcoin story, because as I mentioned before, it could end up being the greatest speculative bubble in world history before it completely collapses.

For more on what could potentially be the next bitcoin see:

The Coming Silver Price Surge Will Shock The World