"The market continues to rise solely on the perception that the Fed’s easy money policy can hold stock prices up indefinitely. We think that this line of thinking will prove to be no more durable than the dot-com bubble that peaked in early 2000 or the housing bubble that topped out in late 2007.  In both cases the market gave back a large proportion of the gains made during the bull market, and we believe that will prove to be the case this time as well.  When the vast majority of investors faithfully believe in a bubble, momentum takes over and the market goes up because it’s going up, ignoring all of the obvious warnings such as high valuations, over bullishness, decreasing earnings momentum and an underperforming economy.  When reality suddenly sets in, as it inevitably does, most investors are left holding the bag, hoping that the market doesn’t go any lower."

"The problem with bubbles is that they force one to decide whether to look like an idiot before the peak, or an idiot after the peak."

The chart below is one you may have seen before - showing the correlation between Quantitative Easing and the rising stock market. It implies that QE controls how high the market will rise and keep it from falling in the future. The Fed, we are told to believe, has created a true "invisible hand."

Before discussing the chart, I want to review how Quantitative Easing works and why it has been very bullish for the stock market during this cyclical recovery.

The Fed purchases $85 billion per month in treasury and mortgage bonds. The Fed prints money electronically and purchases these bonds from a primary dealer (one of the large banks). The banks hand the Fed the bonds in exchange for the cash. The actual process occurs through numbers changing on a computer screen electronically.

The accumulation of these bonds on the Fed's balance sheet creates the growth in the green line seen in the chart above. This process drives down the interest rates on treasury and mortgage bonds (simultaneously driving their prices higher because lower rates = higher bond prices). The Fed is now purchasing close to 100% of the new issuance of both treasuries and mortgage bonds.

The second part of this process is discussed less often...what the primary dealers do with this large stockpile of cash.

In normal times (pre-2008), the banks would use this cash as reserves to lend out into the economy. They would lend money on cars, homes, commercial real estate, small businesses or credit cards. This process stimulated economic growth.

The large banks only need to keep 10% of their cash on the books as required reserves. This means if the Fed were to hand them $10 billion in new cash through quantitative easing, they would then be able to lend out $100 billion into the real economy. The additional $90 billion of new money to be lent is created out of thin air. For example, when you open a credit card line and begin swiping your card at the stores, you are swiping that money into existence each time you make a purchase. As your card hits the machine, the large banks see it simultaneously appear on their screens as an asset. The same process occurs for mortgages, auto loans, etc. For more on how this process works I would suggest watching this brief video on Modern Money Mechanics.

Since the 2008 financial crisis, we have not lived in normal times. As the banks have received cash from the Federal Reserve, they have not lent it out into the economy. They have taken the cash and immediately redeposited it with the Federal Reserve earning 0.25% interest on their money. It is essentially a way for them to earn a return on the money with zero risk.

This $2.3 trillion creates a conundrum for the Federal Reserve. On one hand, they would like to see that money lent into the economy because it would stimulate growth. On the other hand, that $2.3 trillion could be lent out at 10 times that amount, which would create an enormous amount of inflation. Instead, it is sitting dormant on the Fed's balance sheet quietly earning interest. This is why the QE programs have not created inflation that has shown up heavily in the consumer price index. The velocity of money, or how quickly it is lent and re-lent into the economy, is stalled.

Let's now review how this money has impacted the stock market.

Imagine that you lent your neighbor $100,000 to purchase his home. In exchange, he gives you a mortgage note promising to pay the money back with interest. The Federal Reserve gives you a call one afternoon and tells you they would like to purchase that note and they will give you $100,000 in cash. You agree, and they show up at your front door and hand you a suitcase full of money. You hand them the mortgage note and all payments from your neighbor will now go to the Fed.

Now you are sitting with $100,000 on your kitchen table so you think about how you could invest it. You give your mortgage broker a call. The broker tells you that you can open up something called a margin account. If you take that $100,000 back down the street and deposit it with the Federal Reserve you can then use that money to buy stocks. "Excellent." you say. The money is then deposited with the Fed and you go into the market and begin to purchase stocks. Your broker knows that if you run into losses, you will have access to the reserves at the Fed to cover.

This is what the large banks have done. Instead of lending the money out into the economy and trusting American consumers and businesses to pay it back, they are handing the money to their professional traders and letting them put the money to work in the financial markets. This has paid off handsomely for the banks. They earn interest on the money at the Fed AND they earn trading profits off their margin accounts as they gamble in the financial markets.

The problem is that the QE process has become a closed loop. None of the money makes its way into the real economy. The only people that benefit are the ones that already own the particular asset that the banks decide to purchase (which has been dominantly US stocks). The rest of America suffers. This divergence can be seen in the sales and stock prices of high end retailers (who have high net worth buyers benefiting from the Fed's QE programs) and the lower end buyers. 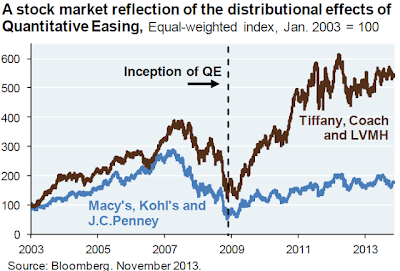 That brings us to where we are today and sums up the non-existent economic recovery seen over the last 5 years. It also explains why people are confused at why stock prices are surging while the real economy stagnates. 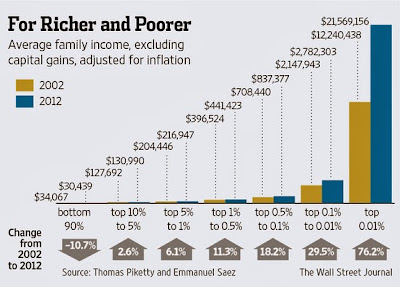 The assumption that has been baked into the markets is that the chart we began with will always move higher in perfect correlation: the rise in stock prices will be determined by the size of the QE program. This assumption, is false, and will soon be devastating for those that now believe it.

The banks are not limited to purchasing U.S. stocks. The chart above showing the rise in the Fed's asset prices with rising U.S. stock prices is a coincidence not causation. The primary dealers can wake up tomorrow morning and decide that they would like to start purchasing REITs in Brazil, Asian water companies or mines in South Africa. They will ride this U.S. equity rally for as long as possible and when the music stops, I assure you they will be the first out the door.

If the U.S. stock market began falling while the Fed was still conducting QE, the misplaced belief in the Fed's "power" to control the markets would be removed. They have already begun to lose control of the bond market. People will look back years from now and marvel at how ridiculous it was to think that the Fed has the magical powers they are believed to hold today.

“For as long as I can remember, veteran businessmen and investors – I among them – have been warning about the dangers of irrational stock speculation and hammering away at the theme that stock certificates are deeds of ownership and not betting slips… The professional investor has no choice but to sit by quietly while the mob has its day, until the enthusiasm or panic of the speculators and non-professionals has been spent. He is not impatient, nor is he even in a very great hurry, for he is an investor, not a gambler or a speculator. The seeds of any bust are inherent in any boom that outstrips the pace of whatever solid factors gave it its impetus in the first place. There are no safeguards that can protect the emotional investor from himself.”