The Quantitative Easing Drug Has Entered The Bloodstream & Subconcious

While both the media and buyers of paper asset prices at these "frothy" levels are 100% confident that there will be no negative consequences from the Fed either removing their stimulus or just letting QE run forever, there are a select few people around the world who still pause for concern. After injecting the QE drug for 5 solid years combined with 0% interest rates, it begins to feel like a zombie movie as more and more people around you are infected with the disease.

I have discussed this topic from every possible angle, but reviewing it again is important because every day the madness builds around us making it more difficult to stay focused on what is really happening.

Since the taper off announcement back in September it has been full throttle forward on risk paper assets. The stock market is a one way rocket ship higher with every index hitting new highs on the hour. The 10 year treasury market has backed far away from the dangerous 3% level. Corporate bonds, specifically the high yield (junk) bonds, are now back at the mania yields seen earlier this year. 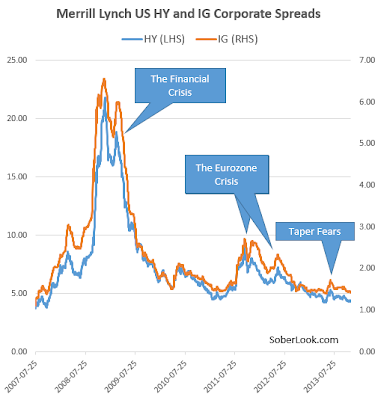 The following from a Reuters article this week titled "Corporate Bond Liquidity Timebomb Ticking" does a great job summing it up:


Concern about defaults, however, is most keenly felt at the more speculative end of the market, called high-yield, where issuance is at $414 billion so far.
"At the moment they are buying at low-yield levels they are being handsomely compensated for default risk because there will be hardly any defaults in the next two years," said Hans Stoter, chief investment officer at ING Investment Management, which manages $238 billion.
"But if we move to the next default cycle, which is, I think, two to three years away, and people really get worried about getting their money back and they want to exit their positions, then we are going to be in a full room heading for the exit door and the door will turn out to be a very small one."

As home prices surge higher in some markets, buyers are once again taking out home equity lines to upgrade their homes. In an article from Bloomberg titled "Faucets at $1,000 Abound As Home Equity Spigot Opens," we learn that home owners are no longer happy with their granite counter tops, they must upgrade to marble.

The QE drug has been with us for so long that it is now accepted as permanent. The longer people live in this artificial world the more they believe it will stay, and they begin to make all decisions around this new reality. This is why so many people are hurt so badly once this process is reversed and the curtain is pulled back to show that there is no fundamental economic recovery, only a heroine induced high.

The four largest areas of concern for the reversal of QE are:

1. The reversal of risk asset prices (we saw a preview of this in June). All the benefits of asset prices rising are immediately turned into negative consequences on the way down. The problem is that on the way up investors borrow money (leverage) to take maximum advantage of the new "permanent" rise in assets. This leverage creates a waterfall cascade of selling on the way down.

2. Rising treasury prices will send the annual interest on the national debt much higher. If rates normalize (back to the average treasury yield seen just over the last 20 years) then the annual cost to carry the current $17 plus trillion in federal government debt would be well over $500 billion annually. That is just interest, it does not include the money needed to roll over existing debt as it matures and the annual deficit needed to fund government spending. As rates rise further and debt continues to mount, you begin to enter the Greece like end game spiral.

3. Rising treasury prices will reprice corporate bonds, state and local government debt and mortgage bonds. You could write an entire book on the consequences of that last sentence. Rising mortgage yields will crush both the housing and commercial real estate market.

4. The Fed itself will become insolvent. The Fed's balance sheet is now composed of long term treasury and mortgage bonds. They are leveraged at 57 to 1 on this debt. Should rates rise slightly these assets move underwater and in order to stay solvent by accounting standards they would need to begin borrowing money from the treasury to cover the difference. This would come at a time when the government would need money the most (see 2 above). I talked about this topic in detail in: Why The Fed Can Never Exit

For more on coming problems with QEternity see: The Fed's Rocket To Nowhere