After launching higher in spectacular fashion over the past 18 months, the median sales price of an existing home in the United States hit a ceiling over the summer and has descended rapidly. 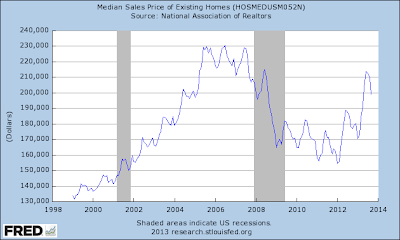 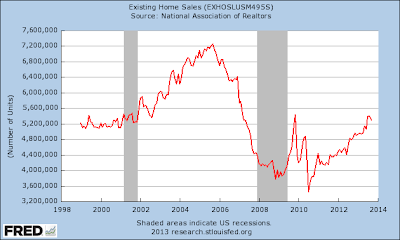 While new homes sales, after reaching previous depression level troughs at their most recent peak in sales, have also turned down sharply. 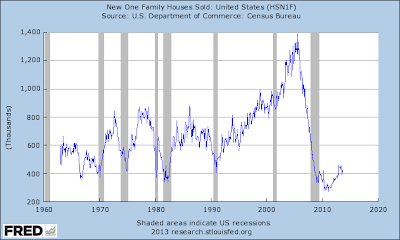 This slow down was due in large part to the surge in the 30 year mortgage rate seen below after the Fed whispered the possibility of tapering their QE program in May. After falling steadily for 5 straight years (which everyone assumed would continue forever), rates bottomed in May and rocket launched higher. Higher rates combined with the surge in home prices from early 2012 to mid 2013 seen above, greatly reduced the affordability for the average American (higher prices + higher mortgage rates = higher monthly payments). 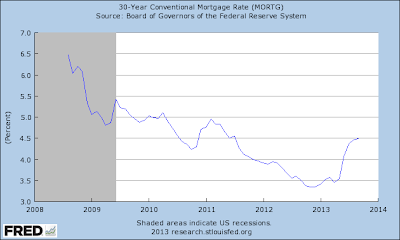 With such a strong "recovery" in place in the economy you would think that rising incomes would offset rising mortgage cost taking away any affordability issues. Those that have been paying attention know that wages for the 99% have been stagnate for decades. This trend shows no signs of changing. It is the 1% that have received the wage growth and unfortunately there is only a certain number of homes one wealthy family needs or wants to purchase. 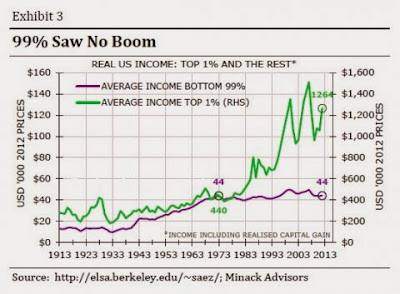 The chart above helps explain why flipping has begun to diminish at a slower rate for the super high end (red line below). With the stock market surging, the wealthy feel wealthier and they are once again ready to participate in bidding wars for the largest mansion (temporary) stock bubble equity can buy. 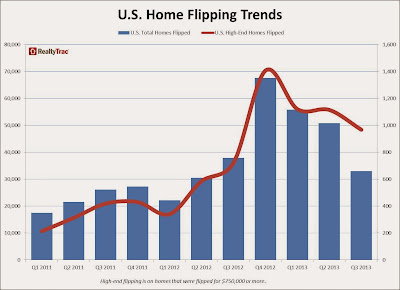 Do we have a gauge on what rising mortgage rates could mean on existing home sales moving forward? Yes, pending home sales have fallen 21% month over month, the largest drop since September 2001 when home owners were nervous about making a large investment for obvious reasons.

With the real homes buyers moving back to the sideline it only leaves the large investment groups to pick up the slack, and they are already purchasing 33% of all homes sold. These groups are showing signs of fatigue as their portfolios swell in size. They are beginning to compete with other investment groups, new apartment supply and their own supply for rent prices in the market. In major investor focused markets rent growth has shown signs of slowing. As they plug these new growth rates into their excel spreadsheets, they will begin to tap on the breaks for new purchases.

The built up momentum and euphoria in the market can probably propel it higher in the short term, but without a major surge in employment and wages combined with another large drop in interest rates the underlying fundamentals for the housing market remain very concerning.