Interest rates are currently sitting at the bottom of their 30 year channel downward. This allows individuals, governments, banks and corporations to borrow cheap. No major forecast around the world shows what would occur if this channel were to reverse course and begin a secular move upward. 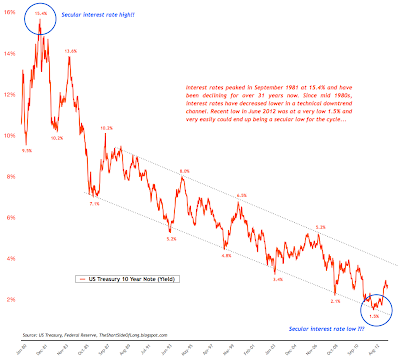 Corporations have seen their profits soar since 2009 due to their ability to access inexpensive capital, the reduction of costs (mostly employment costs) and productivity gains. Can this continue at the same pace over the years ahead? Some question if borrowing costs will move lower (see above chart) or the ability of corporations to cut costs further (is there anyone left to fire?). The chart below shows that over time corporate profits mean revert to GDP. The ratio of corporate profits to GDP is now 70% above the historical norm.

A measure of U.S. stock market valuation, the Tobin Q, has reached a high above any previous market peak in history before the 2000 bubble. 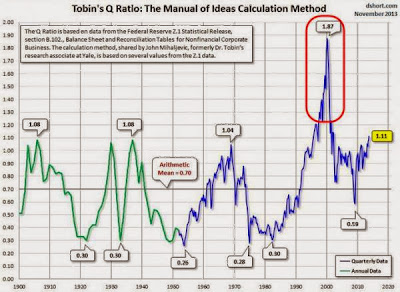 The Shiller P/E ratio is telling a similar story. Bull markets move closer to beginning when the P/E ratio is under 10 and move closer to ending when they cross above 23. The ratio has now crossed above 25. The creator of this valuation metric, Robert Shiller, warned of a stock market bubble in an interview with Reuters this week. 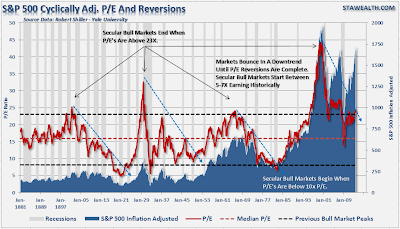 Measuring the market cap of the S&P 500 against GDP shows that the market has been expensive since Greenspan's "Irrational Exuberance" speech in 1996. The final washout and cleanse of this QE induced speculative mania still has not come. 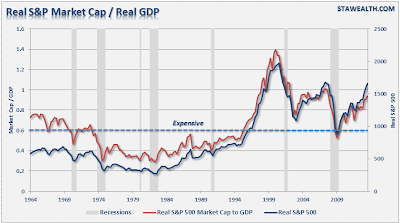 Then in 2008 earnings came in at $60 making the 12x forward earnings projection in late 2007 an actual 24x earnings. This is how the market can always be shown as cheap. These same exact discussions and forward projections took place in late 1999 explaining how the market could easily double again in the next few years. Both times the market crashed 40% or more.

How about money on the sidelines?

Individuals investors have been pouring money into stocks (dark blue line below) over the past 12 months, just as they did during the peaks in 1999 and 2007. 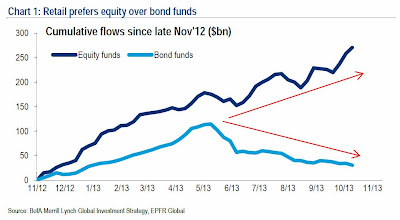 Optimism toward stock prices moving higher has set records in almost every sentiment measure available over the last 11 months. A new record occurred this week when the Investors Intelligence Survey showed the lowest percentage of bears (those that believe the market will fall) in history. Investors Intelligence studies over a hundred independent market newsletters to gain their stance on the market. 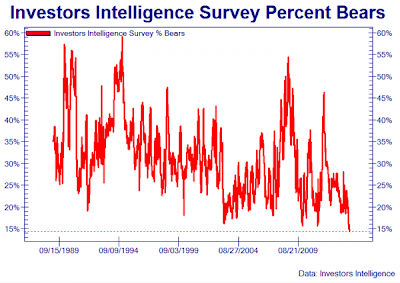 Snapchat received an all cash buyout from Facebook this month for 3 billion dollars. A China company, Tencent Holdings, then offered 4 billion dollars. Both were turned down. You can simply cross out the words "dot com" from the technology bubble in the late 90's and replace it with the "social media" technology bubble of today. While the names and characters are different, the story will end the same.

The price of fine art, farmland and bitcoins are surging to astronomical levels. The wealthy are bidding up the price of sports cars to insane levels to have the best possible trophies in the garages of the homes they will probably never visit. Liquidity is sloshing around everywhere.

Meanwhile, some of the best commodity prices based on supply/demand dynamics such as precious metals and agriculture are seeing their prices fall every day. Investors are dumping commodities across the board to load up on U.S. stocks. I feel like a kid in a candy store waking up to find silver, corn and wheat prices cheaper every morning. Some of my favorite investments such as energy companies, water companies, Asian stocks and emerging market bonds/currencies could (hopefully) see further declines as investors rush like a herd of lemmings toward momentum chasing assets. I have my Christmas list ready, hoping that investors dump more quality assets.