One of the better books released in 2013 was "Fate Of The States," by Meredith Whitney. It is a phenomenal outline of the trouble coming in the municipal bond market and how the states with their budgets under control, found mostly in the center states of America, will prosper as businesses and new citizens move there.

The municipal bond market, unlike other more speculative or junk portions of the bond world, felt the first taste of a tremor in 2013. 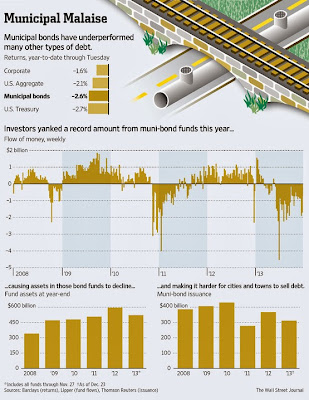 This is only the first look of what is to come in the years ahead as the cities and states that over leveraged during the housing boom are left with bloated debt piles and massively underfunded pensions.

Detroit has been the landmark story in the municipal world, but it will only be the introduction. Many cities are watching with a very close eye on how the Detroit bankruptcy is handled because it will serve as a blueprint model for cities in the future.

Cities will soon learn that the only way to restructure pensions, which are drowning city tax receipts, is the bankruptcy courts.

The muni bond market is $3.7 trillion in size and the bonds are held by mutual funds (401k's), insurance companies, banks and other pension funds across the country. A repricing of interest rates in the market (which investors will require to take on the newly discovered risk), will crush the values of the bonds currently held within portfolios and simultaneously make it more difficult or impossible for cities to continue to borrow to survive. This will lead to additional defaults which will then push rates higher.

The next major trigger for the market may come from a tiny island located off the United States. That island is Puerto Rico, an unincorporated territory of the U.S. If you were to compare the United States to Europe, Puerto Rico would certainly be the Greece.

It would take 70 Puerto Rico islands to cover the state of Texas, but the size of the island's debt burden is in the same league as California and New York. While New York and California have 19 million and 38 million people living in their states, Puerto Rico holds only 3.6 million people (a number falling rapidly) to try and service the debt.

The Puerto Rico economy is in shambles. The current unemployment rate is just under 15%. 40 percent of the income its citizens receive comes in the form of transfer payments with 27% of the population on food stamps. They have been in recession for 95% of the last seven years.

Puerto Rico must refinance $700 million in debt by June (on top of the $850 million in they are "projected" to need to borrow to cover their annual deficit). The problem? The market is no longer lending them money. In order to get their funding, they are turning to their local banks - the same strategy currently being put in place by the bankrupt countries in Europe.

It is a ponzi scheme on a massive scale, and the losses will be enormous. How would a Puerto Rico bankruptcy compare with Detroit, the biggest in history? It would be five times larger.

Trouble in Puerto Rico in the months ahead could be the trigger that reprices the rates of the $3.7 trillion muni bond market higher, which would then push those cities on the edge of survival over the cliff.

Up Next: Rogue Wave 1: Japan Is A Powder Keg In Search Of A Match