Before taking a look at U.S. real estate or looking at the economy from a global perspective, we must first review the one asset class that has experienced the greatest possible benefit from the grand illusion: U.S. stocks. The chart below shows the breathtaking rise during 2013. 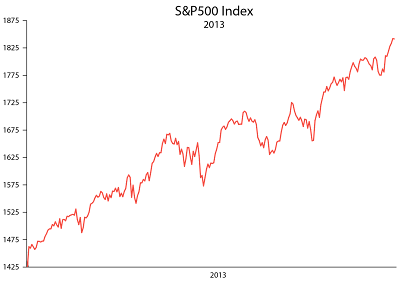 For reasons most people understand completely, U.S. stocks are fundamentally better to purchase at times when they are inexpensive relative to their earnings and hated from a psychological perspective. While it is arguable that stocks were not inexpensive from a historical price to earnings perspective in March of 2009, we saw that sentiment levels toward stocks represented a buying opportunity during that period. During the week stocks bottomed in 2009, the daily sentiment index reached 2% bulls. That means 98% of investors felt stocks would move lower from that point. For more on how people felt toward stocks at that moment see Flashback to March 2009: What Was The Outlook For U.S. Stocks?

On the opposite side of the coin, it is easy to understand that a less attractive time to purchase stocks is when they are expensive relative to their earnings and loved from a psychological perspective. We saw this during December of 2007. For a review of how investors felt toward stocks during that time see Flashback to December 2007: What Was The Outlook For U.S. Stocks?

As of today, January 5, 2014, I believe that based on the price of U.S. stocks relative to earnings and sentiment, they are more dangerous to purchase today than almost any point in history. This includes 1929, 1987, and 2007.

Market observers will immediately shout that during the mania years of the late 1990's that stocks reached a price level far more dangerous than where we stand today. They would be correct, for the market as a whole. However, back in 2000 the most pricey stocks skewed this number greatly.

If you review the stocks in the S&P 500 individually, the median price to revenue multiple is actually higher today than it was in 2000. Smaller stocks were more reasonably valued in 2000 compared to today.

Putting that aside, I think arguing for stocks to move higher in the future because they are less expensive than the peak of the greatest bubble in history is the equivalent of saying riding in a car at 150 mph without a seat belt is safe because you have not been drinking before you drive. 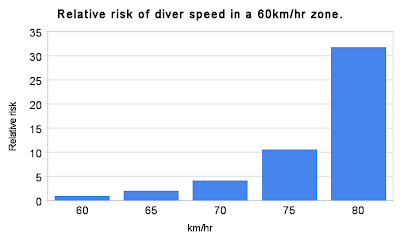 There are two reasons why a general consensus always exists to enter the stock market at the worst possible time.

The first is career risk. Imagine you are a financial advisor with a wife, two children, a mortgage and plenty of bills. You know entering the year 2014 that the market feels mildly (or wildy) overpriced. You know that recommending that clients put more money to work in the market could potentially hurt them. Then you look around and see that every major market forecast from your competitors has the market rising by at least 10% in 2014 and recommends U.S. stocks as the best long term investment for clients (open any media or investment publication other than this website and that is what you will read).

What if this advisor were to say that he felt stocks will finish the 2014 year at a loss and clients should just hold new money in cash? Two things happen. The first is that his firm does not receive the commission or management fee for the new money clients are keeping on the sidelines. The second is that the advisor has distanced himself from the herd. If he says that stocks will rise 10% like everyone else then if he is wrong he will go unnoticed from the crowd. As we just discussed, this is exactly what occurred with forecasts in late 2007.

The same scenario exists in the hedge fund world. Hedge fund managers send out quarterly statements to their clients showing their returns. Clients then compare how their money performed against other hedge funds. If the manager is under invested in the market during the tail end of a mania (believing they are doing the best thing for their client's money), they will face massive redemptions.

The second reason occurs in the minds of the general public. Based on natural human psychology the most comfortable tendency is to move and exist within a crowd. After interviewing thousands of people following the debacle and losses in 2008, behavioral psychologists were fascinated to find that people were less distraught than they would have anticipated. What was the main reason provided for this? Everyone around them was experiencing the same thing. Home prices were falling for their neighbors and friends. All their friends talked about how their 401k's were taking massive losses at dinner events. 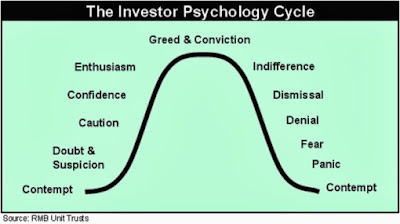 The same scenario exists on the way up. During the initial rise in stocks in 2009 and 2010 it was easy to keep money on the sidelines. Now, after five years of watching prices rise and hearing their friends discuss how great their portfolios are performing at parties, it is almost unbearable psychologically to stay out of the market.

Just as with hedge fund managers, clients look at their 401k mutual fund options to start the year. They look at which funds performed the best the previous years and over allocate their investments to those funds to start the new year.

These two simple reasons are why investors are always caught so wrong footed when the market turns. After watching it occur in 2000 and again in 2008, I thought it would be decades before the same mistakes were applied. Now, less than five years into the most recent artificial market rise, investors have completely forgotten the past. It is both fascinating and remarkable to watch.

John Hussman of Hussman Funds provides an excellent (and free) commentary every week on his website. Over the past month he has provided an in depth analysis on the stock market. Part of his analysis includes a chart I have shown in the past from Didier Sornette, showing the typical wave pattern of a market during a cyclical advance. The market gyrates violently during the early part of the advance as participants are afraid and sell off gains. During the latter stages the declines become more and more shallow as every dip is immediately bought ferociously.

The wave pattern of the cyclical market cycle is shown below in red and laid against the S&P 500 in blue. The similarity between the two is astounding. The green line shows that the risk of a crash begins to grow exponentially as the market moves further along without a major correction. 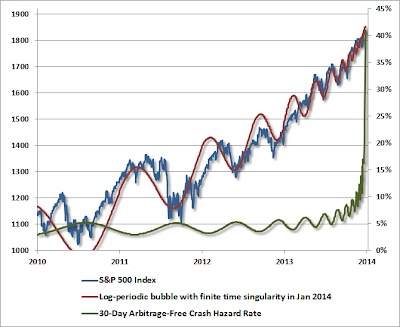 Hussman shows that the market has reached the terminal phase of the advance. The market is already at the stage where it is "ready" to decline significantly.

Hussman uses an extensive set of historical data to determine a real time over valuation or under valuation metric for the market. The chart below shows that the market has triggered his overbought, over bullish, rising yield condition since February 2013 without an "event" occurring. This is the longest period in history that these factors have been in place without a sell off event hitting the U.S. stock market. Based on his historical data set you can see what occurred when the market triggered these levels in the past (blue lines). The length of the current mania in place while all the data is aligned for a decline only solidifies the danger facing the market in 2014. Its resolution should be historic. 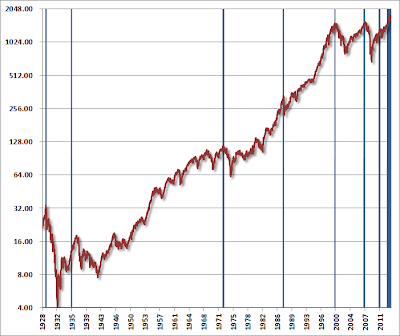 You will often hear from analysts that based on the price to earnings ratio, U.S. stocks are currently cheap. This is because the analysts use a forecast for earnings, not what is actually taken place. U.S. stock prices were sold to the public as "cheap" in November of 2007 because earnings were forecast to rise much higher in 2008. Then earnings collapsed. This is how it works at market turns.

There are various tools to use for showing real price to earnings, but the most common is the Shiller P/E ratio. It shows that the market today is now at price levels above where previous secular bull markets peaked. The Shiller P/E ratio has come under fire from sell side analysts over the past few months (those that sell stocks for a living). While it is beyond the scope of this discussion, a response to the validity of the index can be found here.

Speculators are now using record amounts of borrowed money to try and push stocks higher and supercharge gains. NYSE margin debt has reached almost 2.5% of GDP, which is a level only seen at the 2000 and 2007 market peaks. Total margin debt continues to hit new record highs. Net credit balance is back in the dangerous range of previous corrections/collapses. The Rydex Leveraged Bull/Bear reached an all time high for the bull camp at 6.12 in May and August of this year. It has since doubled from that all time high, crossing 12 on the bullish side. 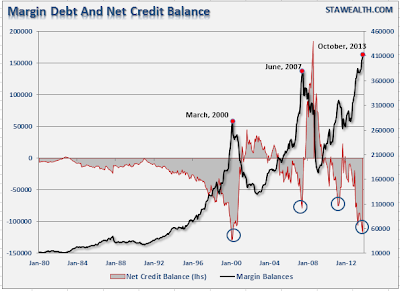 Sentiment toward the market has roared from record high levels to earth shattering levels of bullishness. The Investors Intelligence survey has reached a new record divergence between those that are bullish and those bearish. 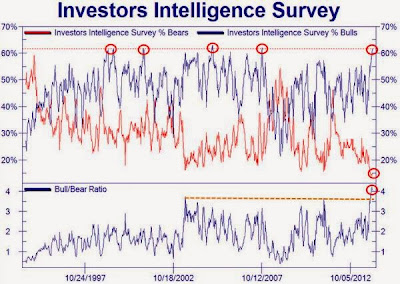 The bullish sentiment toward the S&P 500 is shown below. The red line shows sentiment levels have now surpassed post 2008 highs, just as the S&P 500 has soared through 1830 (becoming the most expensive it has been during the rally). 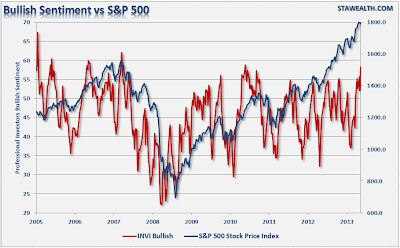 The CBOE total put/call ratio on a 5 day average has blasted to the most extreme point in over 8 years. Option traders are now betting 1.5 calls for every put. The National Association Of Active Investment Managers 3 week moving average finished the year at an all time record high.

The average investor (seen in mutual fund flows like 401k's) has moved out of stocks for four straight years. In 2013 they returned with a vengeance. The Weekly Association of Individual Investors poll jumped to the second highest reading since 2009. 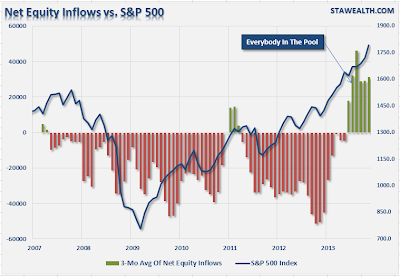 Corporate profits as a percentage of GDP are at all time record highs. Over the long term this percentage tends to mean revert. A slight reversion to the mean would mean very big trouble for stocks that have priced in this chart rising exponentially forever. 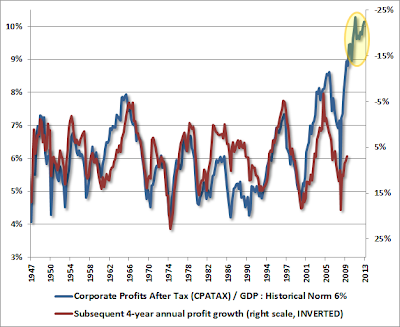 This reversion may already be taking place as the S&P 500 showed an 11.4 negative to positive pre-announcements guidance ratio. This is the most negative ratio on record by a wide margin. 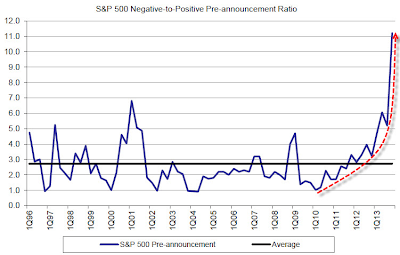 The secular bull market in the early 1980's began at 5 to 7 times earnings valuations and a dividend yield of 6 percent. Interest rates and inflation were at extremely high levels with rates just beginning their 30 year decline. All levels of the U.S. economy were just beginning the largest leverage ramp in history, which would take consumption levels to 70% of GDP. 401k plans had yet to come into existence which would pull the general population into the market. Stocks were the most hated asset on the planet after falling and trending sideways for 17 straight years. That was an incredible time to purchase stocks. The back drop for the stock market today paints the exact opposite picture described in the early 1980's.

The average secular bull and bear market for U.S. stocks lasts 17.6 years. We are now 13.8 years into the current bear market. I believe we have one more major decline coming in the markets that will surprise almost everyone. At that point the secular bottom will be in place and it will create the greatest buying opportunity to purchase U.S. stocks this generation will ever see.