The Jobs Report Was A Disaster: Discard Noise & Focus On The Trend

The jobs report announced a few minutes ago in the United States was a disaster on paper. The nuts and bolts of the number provided a 74,000 rise in payrolls on expectations of 200,000 (or more by most economists). Last month's rise was enormous at 226,000 new jobs added. The month over month decline was the largest since December 2010.

The unemployment rate fell due to over 300,000 people "dropping out" of the labor pool. This group is composed of people that have seen their unemployment benefits end, have given up looking for work, or decided to retire.

Looking at the chart below you can say that the labor force participation rate is now back at the point we were at in the late 1970's. What is lost on the data is that as recently as the 1970's (and certainly in the 1950's and 1960's) it took only one member of a household working to take care of a family. Women worked during that time because they wanted to, not because they had to. 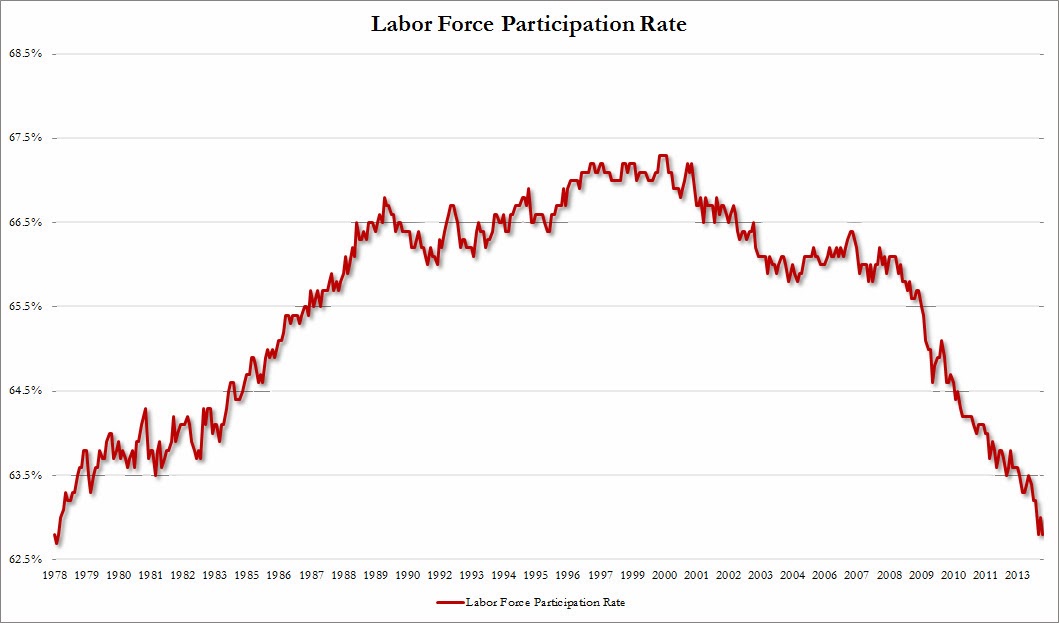 As discussed numerous times in the past, the biggest dilemma facing the Fed is the real economy is not recovering (unemployment rate falling due to people giving up looking for work) while froth and asset bubbles are now everywhere (risk assets at nose bleed prices).

I would like to point out that the jobs number should be looked at based on the trend, not a specific month's data. The two basic trends as I see them are 1) unemployment in general is improving at a sluggish pace 2) a large portion of the economy is not recovering seen in the continuous monthly decline in the participation rate.

The following analysis of the jobs report comes from Barry Ritholtz at The Big Picture. It provides an excellent summary of what you should focus on when the data is announced on the first Friday morning of every month:


1) What matters most in the Employment Situation is the overall trend in hiring. Is it continuing what it has been doing for the prior three months? What matters is not whether it is expanding or contracting, but when it reverses that trend.
2) In a labor force of 150 million people, the change in net monthly new workers minus those no longer employed — essentially what the nonfarm payroll report measures — is a rounding error, a miniscule one tenth of one percent (i.e., 150k out of 150m).
3) If you use the correct long-term hiring cycles, you can get a pretty good estimate of likely hiring patterns. Since we are now in a post-credit-crisis recovery period, you should expect a mediocre but slowly improving job creation. That is what has been happening.
4) The model that produces the monthly number is part measurement (establishment surveys), part extrapolation (birth-death adjustment). This is then revised, as more and better data comes in later. The overall NFP number is subject to subsequent revision next month and again the following month. The model gets re-benchmarked, is seasonality adjusted, as one-off weather or other events impact (and that impact then attenuates away) the overall NFP series.
5) Like all models, the Bureau of Labor Statistics model is flawed, but not useless (to paraphrase statistician George Box). That is why looking at the overall trend versus any specific data point is so much more valuable.
6) Last, while hiring is a well-known lagging indicator, we can look at the three components that often provide hints as to future hiring activities. I hesitantly call them leading components, but they do help to shed insight each month into whether we are improving or backsliding. They are: Hours Worked, Wages, Temp Help.
h/t Zero Hedge