If you've read the headlines recently you have probably heard that "companies are sitting on a record amount of cash." This is true. Then you hear how all this cash is waiting to be deployed which will create explosive earnings growth in the coming years. Sounds amazing.

Imagine that your next door neighbor asks you to lend him $20,000. He takes you inside and shows you his bank account which holds $100,000 in liquid cash. He then tells you that the money will be used to invest in his business to create explosive growth in the coming years. What is the first question you would ask your neighbor before lending him the money?

"How much debt do you have?"

He then shrugs his shoulders and says he has about $110,000 in business debt, which is currently locked in at only 4% for the next few years due to the incredibly low interest rate environment.

How would you proceed? You would most likely thank your neighbor for inviting you over but keep your money safely invested at the bank. How does this apply to corporate cash?

The chart below shows the "record cash" against the record net debt companies hold today, which is now 15% higher than it was prior to the financial crisis. Click for larger image: 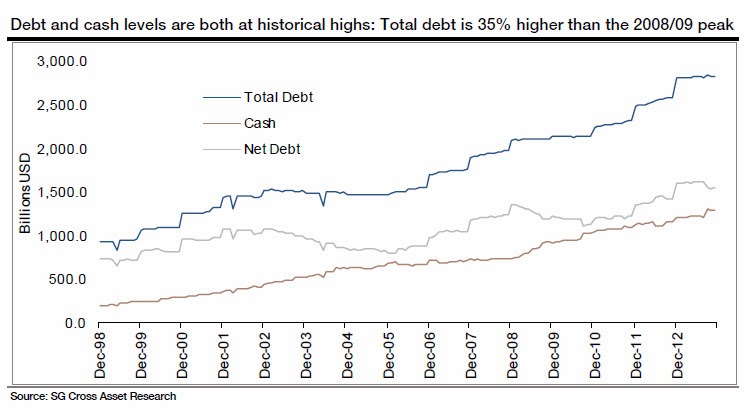 Debt is borrowed through corporate bonds which have recently been issued at all time record low interest rates. When those bonds come due they will need to be refinanced at far higher rates (if you believe rates will move higher in the future), or the cash will be needed to pay down the debt. There are a very small handful of companies such as Apple that actually have a large pile of cash. Almost all companies, however, have no net cash.

Want to know another secret? Over the past year companies have been borrowing money at these all time record lows rates and using the funds to.....drum roll.....repurchase their own stock to boost stock prices. We can only wonder what happens when this process begins to move in reverse.