In 2008 the global economy and financial system suffered a heart attack due to the excessive debt taken on around the world. The heart attack was triggered by the collapse of the subprime mortgage market in the United States.

Since then the global economy has been kept on life support, meaning low and stagnating growth, due to two main forces:

Just how large has the debt mountain grown? According to the BIS, from mid 2007 to mid 2013 global debt has grown from $70 trillion to over $100 trillion. You can see in the chart on the left below that the bulk of the growth since 2008 has come from the government sector (yellow). As of mid 2013, total government debt had grown to $43 trillion. 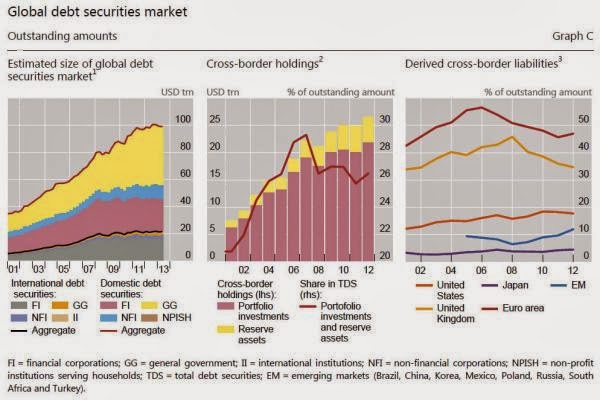 Gross World Product is approximately $74 trillion today providing a ratio of the debt burden to the total size of the global economy of 135%. To put this in context, Greece's economy begin to collapse after it crossed the 130% debt to GDP ratio a few years ago.

In very simple terms, the world has taken on far more debt than it can ever repay. As long as new debt can be issued in order to refinance what has been borrowed, helped by the "easing" of central banks, then the debt mountain will continue to grow larger and the global economy will continue to grow at a stagnating pace. Astute observers will note this is also called a ponzi scheme.

The problem, which we saw back in 2008, is that this situation is unsustainable. The biggest question facing investors over the next decade is how the next collapse will unfold.

There are five main areas of the world that could immediately trigger a debt crisis. What is fascinating is that each region has a unique story. You could write an entire book around each one.

Which crisis will erupt first? I have no idea. When you take the time to research each individual story, it feels as if you are an engineer watching five bridges that are structurally ready to collapse.

We live in a world today where people believe that because these bridges have not yet collapsed, that they never will. Most global stock markets, real estate markets and bond markets have not priced in any potential risk with these five bridges. Just as investors once believed that real estate prices could never decline, market participants today are 100% certain that central banks around the world will be able to levitate each bridge supernaturally when they begins to crumble.

As an investor, your goal should be to avoid the bridges completely. There will be tremendous opportunity when the mis-allocated global capital realizes the mistake it has made and begins to panic.

I will have much more in the weeks and months ahead on the individual data behind each region above, specifically China which could face major challenges in their credit markets over the next 18 months.