Who Are The Missing American Workers?

The unemployment rate has improved dramatically over the past few years, but we know that this is due in large part to people dropping out of the labor force. The common assumption during the "recovery" has been that people are not looking for jobs because they are retiring. The chart below helps illustrate why that is not true.

The pie represents the total number of "missing" workers since the depression began in December of 2007. The vast majority, shown in the red portion, are those under 55 years old. They are not retiring, but have given up looking for work because either no jobs are available or they have learned to live off of government subsidies. 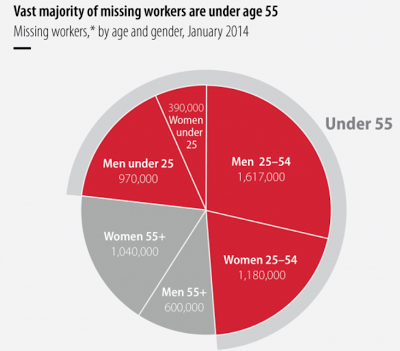 This is the dilemma the Fed now faces. After 5 years of quantitative easing the Fed once again has asset bubbles in stocks, bonds and real estate. While food, energy, utility and medical costs are rising, the real job market is not improving.