Why Investors Feel Poorer As The Market Moves Higher

Over the past year I have discussed the "expensive" nature of the U.S. stock market measured by the Shiller CAPE price to earnings ratio and the Tobin Q ratio, see US Stocks Market Value Metrics Show Tremendous Danger Ahead.

The bulls on Wall Street dismiss these metrics because they say we have entered a "new economy." They say these metrics indicate that the U.S. market has been overvalued for 85% of the time over the last 15 years and that can't be possible.

Wrong. What it means is that the U.S. stock market has been overvalued for 85% of the time the last 15 years. It has been fairly valued the other 15%, and it has never been undervalued during that time.

Many people see the stock market going higher, but do not feel wealthier. Why is that?

In inflation adjusted terms, the market has been reaching lower cyclical highs during the rallies and lower cyclical lows during the declines. The chart below helps illustrate this process with the nominal S&P 500 reaching new highs on the top chart, but the S&P 500 divided by the price index (inflation) steadily declining since the true market peak in 2000. While stocks are slightly higher nominally from the 2000 peak, the cost of living (food, energy, housing, medical, insurance, utilities, education) has gone through the roof. 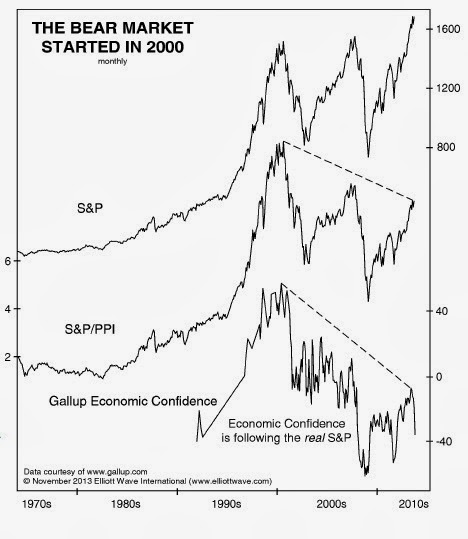 Should the market complete its historical 17.6 year cycle, we will have one more cyclical downturn which will set the stage for the next secular bull market. Following the next major decline the media and masses will declare stocks permanently dead and call them the most dangerous asset an investor can own. This point will mark the best greatest buying opportunity we will see in our lifetime. For more see: