Opportunity In The Uranium Sector

We just recently passed the three year anniversary for the terrible Fukushima nuclear disaster that occurred in Japan on March 11, 2011.

Following that disaster, Japan took their entire nuclear power fleet offline (similar shut downs occurred in other plants around the world) and crushed the global demand for uranium; the key resource used in nuclear power.

It has been a steady three year decline in the price of uranium with the price falling to slightly above $30 per pound as we ended the week. 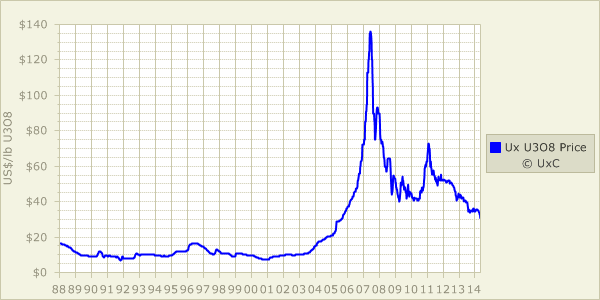 Uranium mining stocks have shared the pain of the price decline. The largest ETF tracking the sector (URA) has fallen from 65 in February 2011 to 15 this past Friday.

Cameco, one of the largest publicly traded uranium mining companies in the world, recently stated that it takes the average producer in the industry a uranium price of $70 per pound to cover the cost of capital and operating costs. Many of the marginal mines have closed since Fukushima hit, with four major mines shutting down in just the last few months.

So what could possibly be attractive about this sector? We may be at or very near the point of maximum pain and suffering, which historically marks the most favorable entry point for investors.

Japan is currently in discussions regarding solutions to their energy needs, which many believe will involve turning on some of the dormant nuclear facilities. They have been forced to import a large part of their domestic energy needs since 2011, which has caused their trade deficit to move massively into the red. This has been an enormous burden heaped onto an already fragile economy (something we have reviewed in the past in relation to their currency and bond markets).

Europe is currently watching in terror as Russia is threatening to cut off a large portion of their energy needs. Adding additional nuclear power in Europe would be a huge step toward removing Russian dependence.

All these facilities will need to be fed tens of millions of pounds of uranium to operate at a time when the world is already producing 25 million pounds less than annual demand.

Due to natural supply and demand laws the cost of uranium must rise to a level necessary for new mines to open and provide this additional production (no mine will begin construction with the guarantee in place they will lose money). This sets up an extremely favorable environment for the price of uranium and the producers already in place to capture the upward price movement in the years ahead.

The question, as always, will be when this actually occurs. Can the prices remain depressed for another 12 months? Of course. Prices only move when the market locates the imbalance and acts on it. However, if you are an investor that enjoys entering markets before the crowd arrives, the uranium sector provides an incredibly attractive entry point today.