U.S. Margin Debt Has Hit A Ceiling: Trouble Ahead?

The major U.S. market indices have tracked sideways for most of 2014, which has been a stark difference from 2012 - 2013 when they seemed to rise continuously throughout both years.

While the major indices have stalled, some of the highest flyers of 2012 - 2013 (social media, biotech, etc) have crumbled. What has happened?

After investors move all-in with with their capital, the only option to continue buying stocks at overpriced valuations is to borrow money to buy more more. This is called "margin debt" in the world of Wall Street.

The chart below shows that margin debt hit a peak in February at $465.7 billion and has tracked downward for two consecutive months resting at $437.2 billion as of April. The important question is whether this is just another bump in the road toward higher levels of borrowed speculation or we have reached the next major peak in the mountains of speculation. 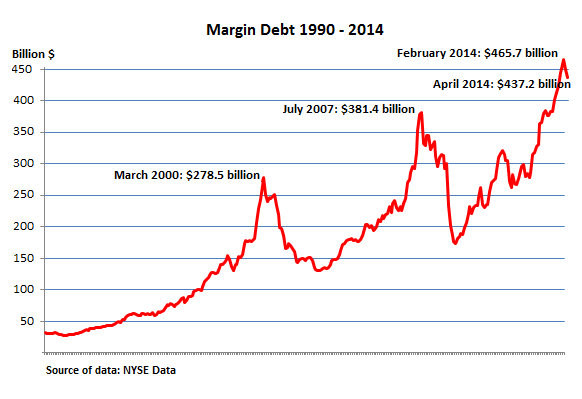 I was listening to an audio interview yesterday with one of my favorite writers, John Mauldin, who was discussing a major investment conference he held over the past week. He said that every year he asks the audience how likely a recession is over the next year. Three years ago almost everyone rose their hand but every year that number has fallen. This year no one raised their hand. He said that all his speakers at the conference were "cautiously bullish" but no one put a high likelihood of a recession occurring over the next year.

I find this fascinating at a time when the first quarter GDP growth was non-existent (some analysts believe the real data showed a decline), and many of the economic indicators (particularly housing) are flashing red.

The average recovery cycle lasts 39 months following a recession. We are currently in the sixth longest recovery in history, yet no one believes it is possible we could enter a recession in the next year. Market turns always catch the most possible people by surprise because at the turn the continued trajectory upward seems assured with months and months of recovery in your rear view mirror. 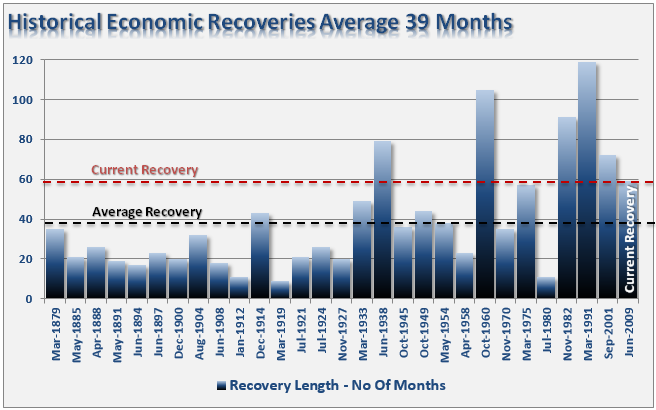 A better question would be to ask; if the investors in the first chart above that are currently all-in with maximum leverage believed there was a 20% chance of a recession in the next year, how would they re-act with their U.S. stock allocations? Of course, we will never know this answer because people move in herds. They believe everything is perfect right up until the very last moment, then run full sprint toward the exits in the burning building. This is why we see slow market rises over long periods during the recovery followed by waterfall declines during the panic sell-offs.

With the now infamous high frequency trading machines controlling the markets, the next panic sell-off should be unlike anything we have witnessed in history.