In a normal commercial real estate market cycle you have a downturn where everyone that did not get out in time is hurt. This occurred in the United States in 1990 and 2007. Following the downturn those that exited in time have cash available and begin making purchases. Some call this the smart money.

Once momentum begins to build in the market, institutional investors (pension funds, insurance funds, large banks, hedge funds) enter and put money to work in the sector . This is usually followed by a few mom and pop entrants, and it concludes with foreign money providing the icing on the cake.

Foreign money enters last because there is a time lag from the Federal Reserve's easy money policy reflating assets in the United States, then having hot money reflate foreign assets, then foreign asset holders looking for a place to park their "excess cash," which is then recycled back into United States real estate.

At the end of a commercial real estate cycle the market looks like a perfect machine. Foreign buyers usually make their purchases all cash so there appears to be limited fall-out that will occur due to interest rates rising or property price declines.

In early 2012 institutional money entered the single family sector with force. The market found a bottom and began to gain momentum. This led to the mom and pops entering with confidence, knowing they had the green light to begin flipping properties again. More recently we have seen foreign money flood into the United States trying to diversify into an asset class that is working.

Think about it; if you were an ultra wealthy citizen living in China and you already own 4 or 5 homes (many do), wouldn't it make since to buy number 6 in the United States to diversify? The residents in China are terrified of their domestic stock market and need another asset source to park the depreciating cash (inflation is running hot in China as the Fed exports inflation onto their shores).

The chart below shows the quarter by quarter rise of institutional demand in the single family market (green bars), until the first quarter of this year when it fell dramatically (see Institutional Investors Pull Out Of Real Estate Market As Boomers Look To Sell). The blue line represents cash buyers, which have moved up to 42.7% of the market. The attractive markets for foreign money are experiencing the largest percentage of purchases in cash; Miami (67.1%), New York (57%), Las Vegas (52.2%), Atlanta (53.2%). 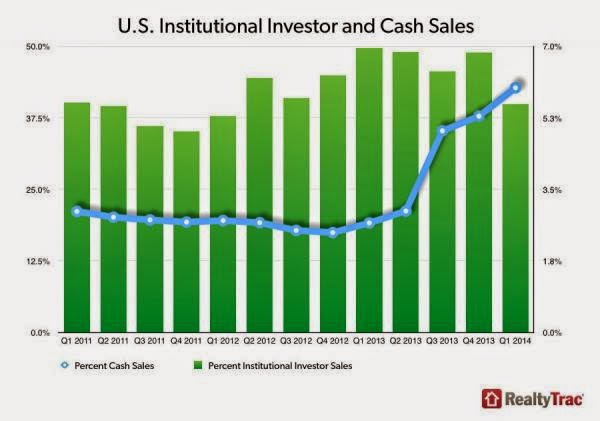 The institutional buyers are slowing purchases while the smart money is already selling. There is no hand off during this cycle from the investment group to regular home owners because at these prices and interest rate levels home are already unaffordable (see Diana Olick Explains Housing Unaffordability).

If residential real estate follows the same historical pattern we have seen on the commercial side (which it has so far), the flippers and foreign buyers will be left holding the bag and taking the bulk of the losses. This could occur due to interest rates rising, the global economy slowing down, or asset bubbles deflating in foreign markets (real estate bubbles in Canada, Australia and China for example). The scary part is that all three of those could be in the early stages of occurring simultaneously right now.

There are many factors that go into making a home buying decision (potential price appreciation being just one of them), but if you are thinking about getting started with a home flipping company you are probably late to the party.