The graphic below provides an incredible visual on the psychological phenomenon called "home bias." Click for a larger image (asset allocation is the second line of pie graphs): 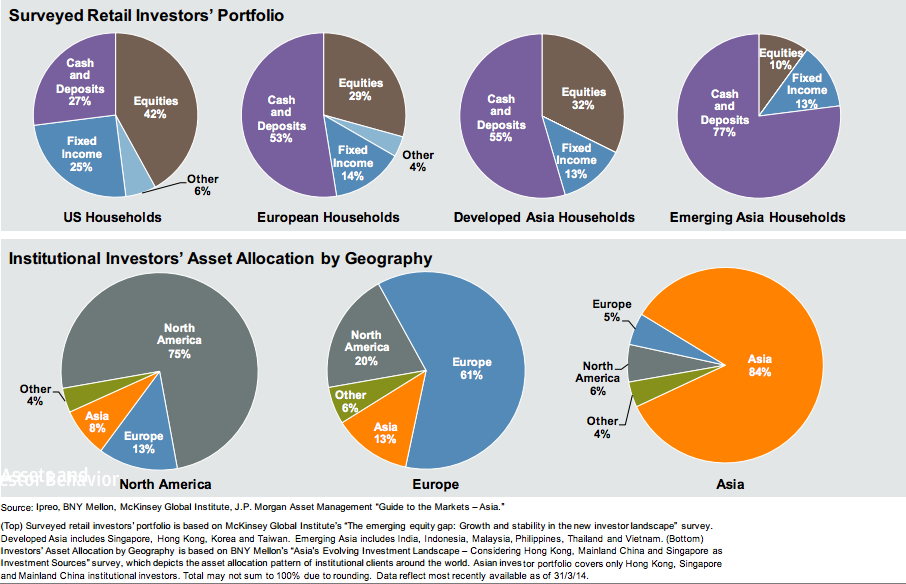 "The tendency for investors to invest in a large amount of domestic equities, despite the purported benefits of diversifying into foreign equities. This bias is believed to have arisen as a result of the extra difficulties associated with investing in foreign equities, such as legal restrictions and additional transaction costs."

We know that today there are fewer legal restrictions or additional transaction costs in investing outside your country due to the introduction of ETFs and low fee mutual funds.

In Mebane Faber's presentation that I posted earlier this weekend, he said his funds do not include stocks from countries that have a CAPE price to earnings ratio above 18. That is the cut off. This helps them drill into specific countries that are selling at an overall "cheap" level relative to the rest of the world, and simply ignore countries that are expensive.

Other than a few brief months in early 2009, the United States stock market has been sitting above 18 on the CAPE ratio for 18 years. Does that mean as a value investor you should have completely ignored U.S. stocks during that entire period? Yes, it does.

I believe that during some point in my lifetime the United States market will be back in the value range seen during the end of the last bear market in the early 1980's (CAPE under 10). Until then, for me personally, taking the time to study the United States market is a complete waste of time because you can find so much value outside of the country.

Here is one of the best charts from Mebane's presentation. It shows the 2013 performance for the 10 lowest CAPE P/E (least expensive) countries and the performance for the 10 highest CAPE P/E (most expensive) countries. In general those that were "cheaper" performed better than those that were "expensive." The two outliers were Russia (cheap stocks did not perform well) and the U.S. (expensive stocks performed great). 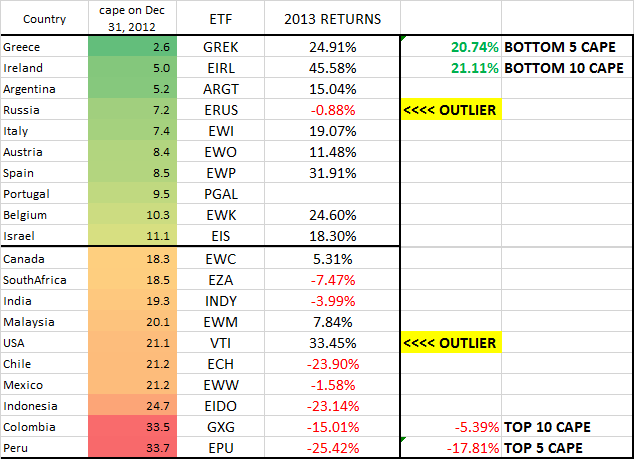 Because I live in the United States and I am surrounded by the home bias, I hear and read constantly that this proves CAPE ratios do not matter or they are an outdated way of looking at stock valuation. These analysts are looking at the data through a vacuum and they are not paying attention to what is happening outside the United States. The rest of the world now makes up 80% of global GDP.

Looking Beyond The U.S. Stock Market To Find Value Around The World