A Rolling Loan Gathers No Loss

We have once again arrived back to the days of merger manias, global real estate bubbles, junk bonds frenzies and subprime auto loans. We are shattering records last seen during the 2007 debt fueled hysteria. Debt is so loved that the most popular form of economics in the world today is called "Keynesian," which actually prescribes that not adding enough government debt is the biggest economic mistake a country can make.

Why is debt a problem in the real world? If you borrow money today for an unproductive use then you must sacrifice in the future to pay off that debt. The simple analogy is a credit card. If you have $20,000 in extra income per year to spend and have fun and put another $20,000 on a credit card that same year, you are going to have an amazing time. The problem, of course, is that you have to pay the $20,000 back the following year. That means next year you will have no fun because your entire $20,000 in "fun money" is going toward paying back what was borrowed the previous year. Economists call fun money "discretionary spending."

In reality, this analogy is what has actually occurred in the United States over the past few decades. Instead of cutting back on "lifestyle" Americans have filled the gap with consumer credit (black line), while wages (red and blue lines) have stagnated and declined. 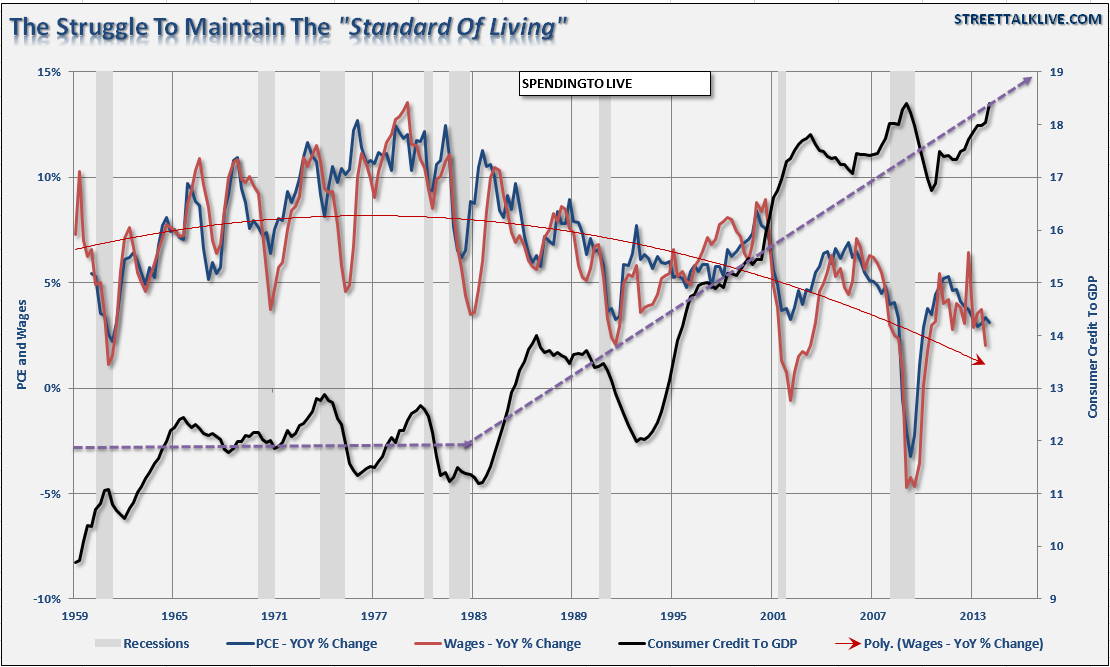 During 1950's and 1960's, the United States churned out the strongest economic machine the world has ever seen (still). Americans produced goods that were exported to the world and saved their income when it was received. These savings were then used to finance new business growth.

1980 was the breaking point for the United States when the country decided it would no longer experience deep recessions; only booms. That was the point when every downturn was met with government spending and money printing. The result was obvious. No large declines in GDP, just a long steady decline lower in living standards. If the market is never allowed to cleanse, it can never heal, like a festering wound covered by more bandages instead of being treated. 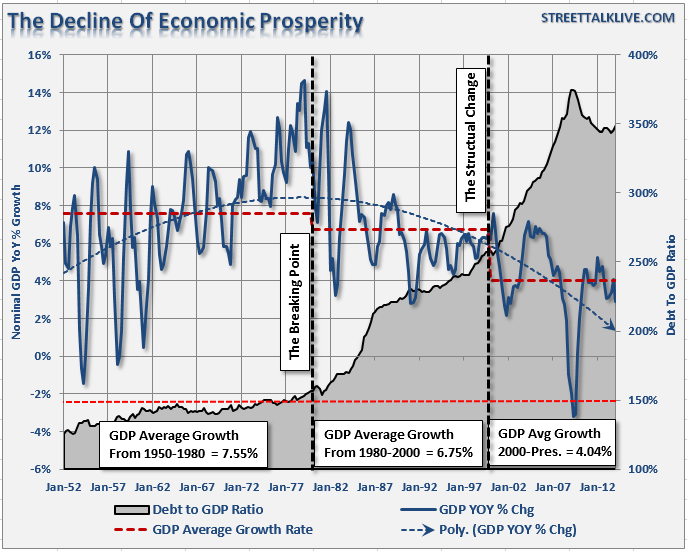 While I often pick on the United States, as I mentioned at the top we have a global debt problem. China has a corporate debt, shadow banking and real estate crisis looming. The UK has a mountain of toxic banking debt, Japan has a massive government debt problem and Canada has already surpassed the danger levels of consumer credit seen in the United States back in 2007. Hong Kong, Australia, and Singapore have huge real estate bubbles. Europe has a government and banking debt crisis now lurking in the shadows which has not been resolved.

Which one will explode first? Which one will be the next powder keg that U.S. subprime mortgages were back in 2008? It is impossible to know. It is like trying to determine which falling snowflake on the snowbank will cause the avalanche. All you can do is take a good look at the snow bank and realize that it is very unstable and dangerous.

Every step of the way you see a larger crisis which leads to a larger stimulus program. The next crisis will be larger than 2008 and the response will be even greater. Ultimately the entire financial system will collapse on itself again, and it is likely the next crisis will be the first where major central banks will need to be bailed out by their global central bank; the IMF.

In the meantime, everything will continue to appear rosy on the surface while the tectonic plates underneath are positioning for an earthquake. As long as the debt around the world can be rolled into a new loan when it matures, then the machine hums along beautifully. When the first person asks for their money back, it's going to get ugly.