I have a new favorite headline from the cyclical recovery in U.S. stocks, which is the second (and I believe last) cyclical advance of the secular bear market that began in 2000. Are you ready for the headline?

The SPY Is NOT Extended and May NEVER Pull Back

Quick note: The SPY is an ETF that tracks the S&P 500. More from the author:

"The idea that the SPDR S&P 500 ($SPY) is overbought is absurd if you look at it from anything longer than a day traders perspective. Extended? Let’s get serious. It may be boring to sit and watch the index go up constantly, but that does not make it overbought or extended. And it also does not make it likely to correct, just because it has not for a long time.

There is strength in this price action. Strength moving higher. Not fast paced leaps and periods of consolidation. Just a strong steady rise. It may be boring, but it is relentless."

We've gone from cautiously bullish, to bullish, to overly bullish, to euphoria to something I don't think we've ever seen before in history; market commentators saying the U.S. stock market will NEVER pull back.

Since the market will "never" pull back, the only question is how high will it be at the end of every year moving forward? We already have the answer for 2014, which came earlier in the week from Jeremy Siegel: 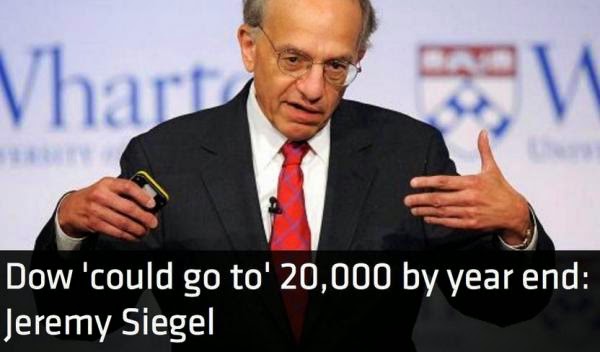 I'm sure this is all going to end well. For a more "rational" view on the markets see: