The Recovery In European Sovereign Debt

We've covered this topic numerous times over the past few years but the chart below helps provide a helpful visual update on where we are in the European sovereign debt "recovery."

By the time we were well into the second year of the sovereign debt crisis in Europe (around late 2011) it became clear the banking system within the PIIGS (Portugal, Ireland, Italy, Greece, Spain) was insolvent. The only thing keeping them alive was the implicit support of the governments standing behind their balance sheets.

The problem was investors were beginning to figure out that the governments standing behind the debt were also insolvent. There was not only a run on the banking system, but on government debt as well. You probably remember yields spiking across the PIIGS (Greece actually reached the point of default).

Understanding that if the governments failed, then the banks failed as well, the banks in Italy and Spain did the only logical thing they could; they doubled down and began purchasing the debt of the bankrupt governments. This makes logical sense if you're a bank executive; if your bank is going to fail anyway, why not collect massive bonuses for a few more years before you walk away and leave the carnage with the tax payers? 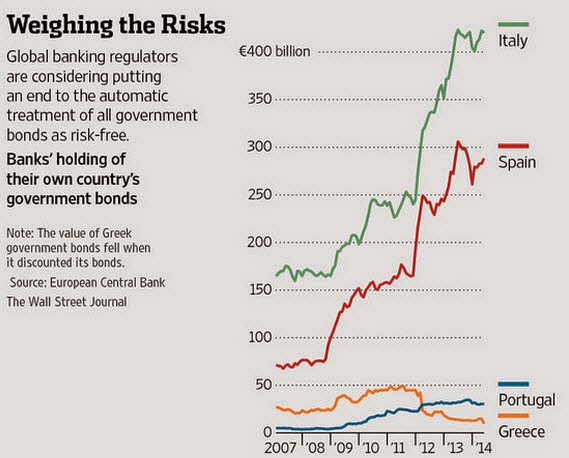 The massive bank purchases put a temporary floor under yields. The European Central Bank provided the next push to the markets by announcing they stood ready to do "whatever it takes." This meant they were ready to finally unleash QE and purchase an unlimited amount of toxic government debt to keep yields low.

Investors then began front running the trade and a few years later we have arrived at the perverse world where the yields in the most bankrupt European countries are now lower than the risk free rate in the United States.

So far the ECB has delayed the promised arrival of QE. If they continue to delay there is going to be an unwind of this trade as everyone that thought they would ultimately offload the toxic waste to the central bank will try to dump the waste back into a bid-less market. If the ECB comes through with the QE program then we push back the day of reckoning in Europe (just as we currently are in the U.S., U.K. and Japan) for a little while longer.