Why The Reformed Broker, Josh Brown, Is Wrong On U.S. Stocks

One of the most widely followed financial sites on the web is The Reformed Broker, with articles written daily by Josh Brown. Josh is a money manager alongside Barry Ritholtz at Ritholtz Wealth Management. I read both Josh and Barry's sites daily because they provide excellent, well-written content on what is happening in the markets. More importantly, they have many opinions that are starkly different from my own.

I think you could sum up Josh's opinion of the U.S. stock market as cautious in some sectors, but bullish on the market as a whole. Anyone who has read this site for more than a few weeks knows that I am currently bearish on the near term potential for U.S. stocks and feel that only a small portion, at the most, of investor's capital should be in U.S. stocks. There is far more value that can be found overseas; see How The Home Bias Phenomenon Impacts Investors.

This week Josh wrote an article titled A Quick Lesson On Market Tops where he presented reasons why investors should stay long the U.S. stock market at today's all time highs.

Reason 1: Although we are currently selling at the same PE ratio as we were at the market’s top in 2007, there is one very important difference – we’re at about half the yield on the 10-year treasury versus back then.

My thoughts: I view the fact that we are at half the yield on the 10 year treasury as a major headwind for stocks in the years ahead. Why? The treasury yield impacts every asset in the world; especially those located in the United States. Corporate bonds tend to track track treasury yields with a built in spread so if treasury yields are low it allows corporations to borrow at lower rates which increases profits. Lower rates allow buyers of commercial and residential real estate to purchase and refinance property at a lower rate which increases profits and disposable income. It allows state and local governments to roll over and issue debts at a lower rate which provides additional capital to spend into the economy. I can go on and on.

The decline in yields has been a turbo charge to the economy since 2009, but we now need to look at what is going to happen moving forward with yields and how that will impact stocks. What happens if yields have bottomed and continue to move higher? The boost the economy has received has helped turbo charge stock prices. If interest rates were to move in the opposite direction from here it would create the opposite effect on the economy and potentially stock prices.

Reason 2: In 2007, virtually all economic growth was coming from private sector leverage, specifically in the real estate market. Today, lots of growth is also coming from leverage – but it’s mostly the Fed printing to buy bonds from the Treasury and then letting them mature and roll off. This is funding deficit spending and preventing a lot of really tough budgetary battles in Congress. This is powering a slowly-growing economy and a record amount of buyback activity which is helping to fuel corporate prosperity, which in turn, theoretically, is creating private sector jobs.The whole mutually beneficial system I’m describing is what Jeff Gundlach has called a “circular financing scheme”. He says that if it works, it’s the most important invention since the telegraph.

My thoughts: The private sector is still in a coma, and the Federal Reserve is now in the process of ending their QE program which they tell us will be followed by an increase in rates. If the U.S. stock market has moved higher due in large part to a circular finance scheme centered around the Fed's QE program, and the Fed is telling us that scheme is coming to an end, is that not a problem?

Reason 3: We’re nowhere near the PE ratio the S&P 500 printed at the height of the dot com boom.

My thoughts: The fact that we have now crossed every valuation point in history by P/E standards (including the 1929 and 2007 tops), but we are still below the 2000 mania peak should not make investors feel comfortable. That is like saying I drank 15 beers in the last 2 hours and I am good to drive home because my friend drank 20 beers in 2 hours one night last week and he did not get pulled over. In addition, a large portion of the mega-overvaluation back in 2000 was concentrated in a small portion of the technology market (as Josh correctly notes in his article). The mean stock in the S&P 500 today has a higher P/E ratio than it did in 2000.

Josh called out Rick Santelli last week on CNBC regarding confirmation bias, and I would caution him to make sure he is not making the same mistake. U.S. stock bulls have been absolutely correct in staying long stocks the last few years, which have outperformed almost every other major asset class on earth. However, I believe that since early 2012 U.S. investors have been playing Russian Roulette by remaining in the market at these incredibly lofty valuations. Just because they have not found the bullet in the gun does not mean it is not waiting for them. Now is the time to put the gun down and walk away while you are (way) ahead. 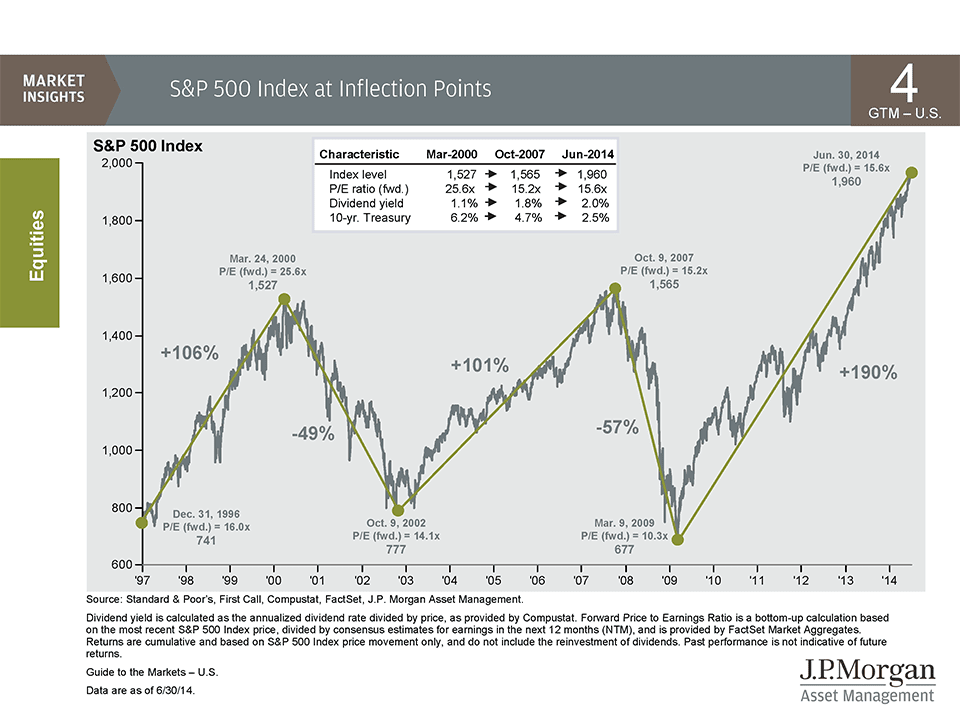