How Far Away Is The U.S. Government Debt Crisis?

The video above makes it appear that we are once again back at the point where the U.S. Federal debt is not a problem in the near term (over the decade) but still a problem "sometime in the future."

Their analysis is based on some key assumptions:

1. The economy is out of the woods are there will be no recessions in the future
2. Interest rates will not rise
3. The demand for U.S. dollars and debt will stay strong forever

Let's review these assumptions one by one:

1. The economy is out of the woods are there will be no recession in the future

We are already over 5 years into the current cyclical recovery. The average recovery throughout history has lasted 39 months or 3.25 years. We are due for a natural turn down immediately, never mind some point far away in the future. 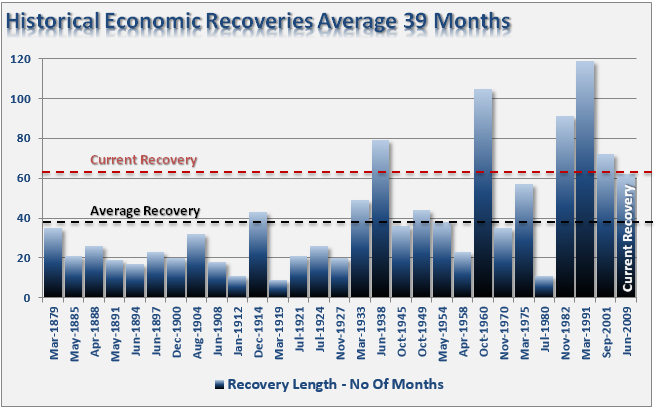 A recession (or relapse into financial panic) would cause the government to "stimulate" with additional deficit spending while tax receipts fall. The result is the return of trillion dollar annual deficits.

2. Interest rates will not rise

We are currently in the final stages of a global bond bubble. Interest rates on government debt are resting at historical lows going back hundreds of years. This record high price for bonds comes at a time when the fundamentals have never been worse. It is not mathematically possible for the U.S. to pay back what it is currently borrowing without severely devaluing the currency it will pay it back with in the future.

Buying a 30 year bond today at these prices is a guaranteed loss of money.  So why are investors making these purchases? They are not planning on holding the bonds as a 30 year investment, they are planning on "flipping" the bonds to another investor at a higher price in the short term. The same exact psychology took place with the housing bubble back in 2005. It did not matter if the rent payments covered the monthly mortgage on the home, only that there would be a greater fool to step up and pay a higher price next month.

3. The demand for U.S. dollars and debt will stay strong forever

A few months back China and Russia set up the foundation to begin trading through their own currencies (rubles and yuan) to avoid the use of the U.S. dollar. The foundation began construction this week when Russian oil giant Gazprom Neft announced they would begin selling oil for Rubles/Yuan.

The BRIC nations (Brazil, Russia, India, China) sat down this year to begin building a BRIC central bank that would bypass the use of the (US dominated) IMF. The IMF is currently the world's central bank.

These are tiny snowflakes on a mountainside that appear to be nothing as they fall. They are slowly building up pressure on the mountain and there is an avalanche coming in the future. The coming change does not mean the value of the U.S. dollar will fall to zero, but if 95% of world trade is conducted in U.S. dollars and that number falls to 75%, it is going to have a massive impact on the demand for U.S. dollars worldwide.

Ultimately, a percentage of the trillions of U.S. dollars resting on the balance sheets of central banks around the world as a treasure chest of protection against currency devaluations will no longer be needed. For more on why central banks build these reserves and how it will change in the future I would recommend reading The Dollar Trap, one of the year's best books.

When just a small percentage of those trillions are sent back to the U.S. it will unleash the inflation in America that has been building up for years. The problem exists right now at this moment, not some point "in the future." It is only being masked temporarily by the (false) assumptions above. The best case scenario is for an orderly decline in value for the U.S. dollar, not a rush for the exits.

As a side note to make everything I just discussed discussed even more confusing, I am currently bullish on the U.S. dollar in the short term and recommend holding cash positions in liquid rolling short term treasury bills. I only hold this cash while I wait for sell-offs in foreign currency/bond markets. The goal is to continue to diversify out of U.S. dollars when foreign currencies/bonds go on sale.