John Mauldin posted the interesting chart below this week showing the cost to produce goods in the top 25 export economies. A few of my thoughts:

Over the past two years companies in the United States have been discussing how they are bringing their manufacturing back to domestic producers because the cost is equal or below the bids they are receiving in China. The chart below illustrates how China has rapidly caught up with the United States in the cost to produce goods (great news for America, not great news for China).

There are only nine countries now less expensive than the United States. Mexico and India are less expensive than China which had provided a boost to their overall economies in recent years (and should continue to help moving forward). Indonesia is the most attractive producer in Asia.

The price of labor in Europe makes their manufacturing costs less competitive. That is already correcting itself as wages are in free fall due in large part to massive youth unemployment (the invisible hand working). 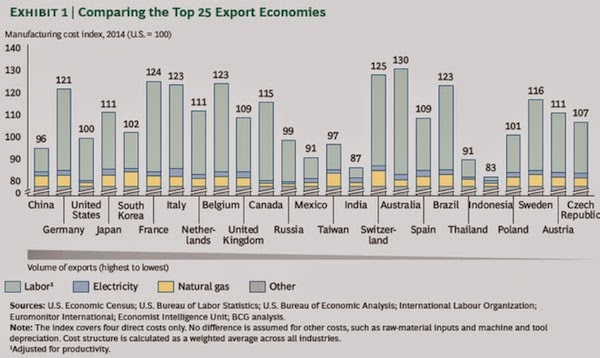 Japan, a country heavily dependent on exports, carries a higher cost burden than many of the Asian exporters. This is part of the reason why Japan (along with Europe) is so focused on reducing export costs through currency devaluation. A reduction in the value of your currency is like a magical reduction to the cost of your exports with no wage reductions needed.

For more see: Japan Is A Powder Keg Searching For A Match