Excellent visual below posted this past weekend at Mauldin Economics showing the growth in global debt to GDP over the last 12 years. While we often focus on the worst offenders here on this site (Japan, U.S., Europe, UK, China) which are the most likely to have a debt crisis/implosion first, it is important to remember that the debt binge that has taken place since the start of this century has been a truly global phenomenon. 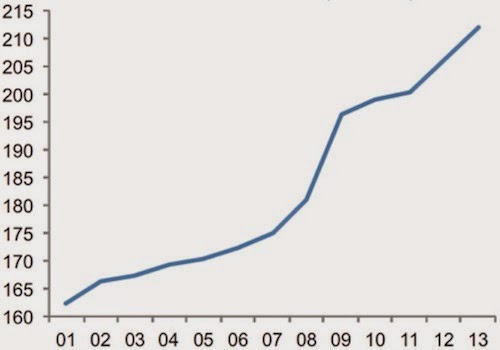 If you borrow money today you must sacrifice in the future when the debt must be repaid. Borrowing money turbocharges present growth at the expense of future growth. We are 75 years into the current debt super cycle so many believe it is impossible for a developed economy to face a real debt crisis (2008 was concentrated in just a small sector of the global debt market; U.S. subprime housing).

My guess is there will be a severe crisis from one of these major economies in the next five years:

I think the likelihood of them occurring are listed in the order above, but on paper every single one of those debt categories should implode tomorrow morning. The only thing that has stopped that from occurring has been the ability to continuously roll the debt into new loans at lower interest rates. This has been supported by the central banks around the world and investor willingness to continue to buy today and hope there will be a greater fool tomorrow waiting to offload the debt.

What If The Stock Market Fell & It Did Not Recover?