The following chart shows where we have come from the start of the quantitative easing experiment in the United States in 2008. The Fed's balance sheet has risen from $800 billion to over $4.4 trillion, as they announced today they would temporarily end QE for the third time. 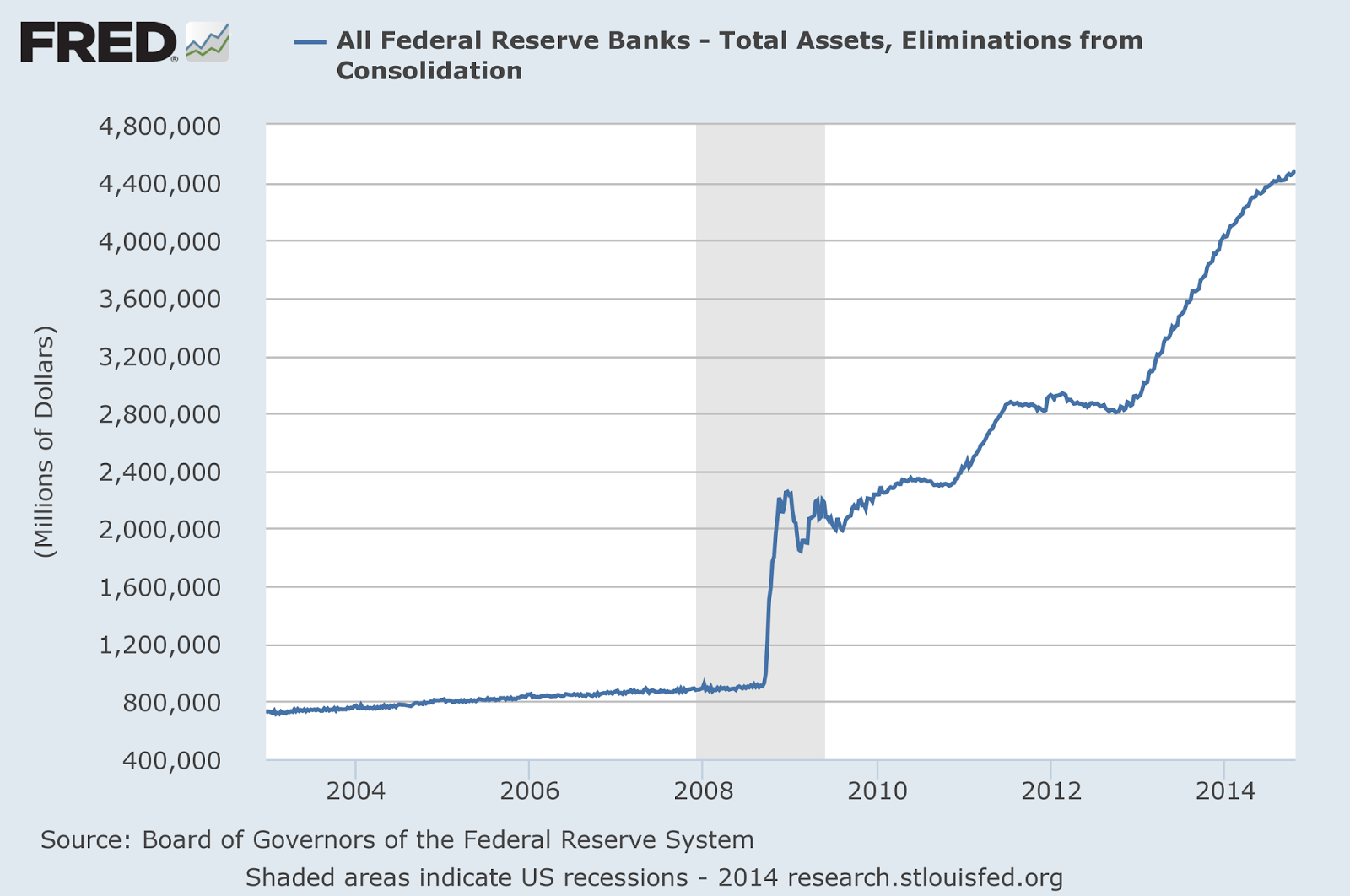 The Fed holds bonds on its balance sheet and when those bonds reach their maturity they will continue to reinvest or roll that money back into new bonds. The same goes for the income (interest payments) the Fed receives on these bonds. In essence, the Fed will continue to conduct "stealth" QE moving forward (about $16 billion per month to keep its balance sheet at the current size). This portion of the QE discussion goes unnoticed by most of the media and financial analysts.

Beyond the stealth QE program that will continue (until they announce a larger real QE4 program in the future) the Fed will hold interest rates at crisis levels for an "extended period." In their words today:

"The Committee currently anticipates that, even after employment and inflation are near mandate-consistent levels, economic conditions may, for some time, warrant keeping the target federal funds rate below levels the Committee views as normal in the long run."

What has the all powerful Federal Reserve so afraid?

The simple truth is that the Federal Reserve is powerless against market forces should they turn against them. Think of someone running alongside a tornado holding a small fan thinking they have the ability to control the direction that tornado will move next. 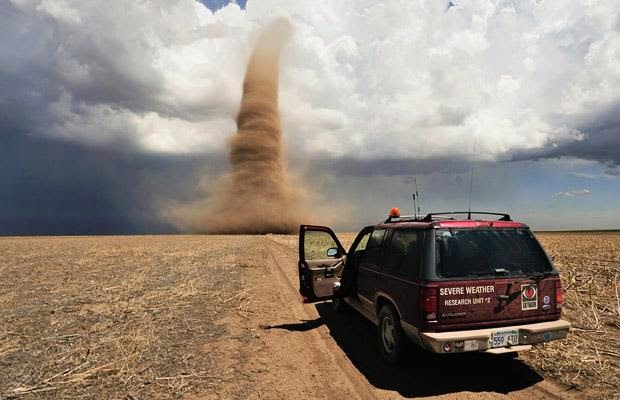 Public (government) and private (individual and corporate) debt globally reached the "impossible to ever pay back" level of $35 trillion in mid 2001. By mid 2007 total global debt doubled to an astounding $70 trillion. This week we received the updated numbers showing that six years later in mid 2013 global debt had crossed $100 trillion (it is certainly much higher today over a year later).

As I mentioned, this debt total includes government bonds, corporate bonds, mortgages, credit card debts, consumer debt, etc. from around the world. It does not include bank debt, which would put it closer to the $280 trillion level. Remember that bank debt can be considered part of government debt because when bank debts go bad the governments (taxpayers) "must" immediately step in to cover any losses; a key lesson we learned from the Lehman Brothers bankruptcy.

The $280 trillion total does not include unfunded liabilities (which in the U.S. alone are over $100 trillion) or derivatives; "off balance sheet" bets banks place with each other. The derivative total is estimated to be fast approaching a quadrillion dollars.

Can you see why the Fed's $3.6 trillion in new money created over the past 6 years is just a drop in the ocean compared to the debt outstanding? What the Fed and the supporting central banks around the world have done is provide a small token of good faith to show they stand ready to protect the financial markets should the $280 trillion in debt begin to wobble.

In essence, they bluffed, and the bond vigilantes folded. Investors have purchased and agreed to roll forward the $280 trillion in debt outstanding on blind faith that the paper contracts they hold will be paid in full the day they decide to cash them in. Global interest rates on the $100 trillion in public and private debt have fallen from 4.8 percent in 2008 to just 2 percent today.

This is why the Fed, the European Central Bank, the Bank of England, the Bank of Japan, the People's Bank of China and every other central bank around the world must stand together in unison, without blinking, to tell the debt markets they stand ready to do "whatever it takes." The balance sheets from the major central banks around the world have grown by almost $10 trillion since 2008 (central banks print money to purchase assets) as they have held rates close to zero. 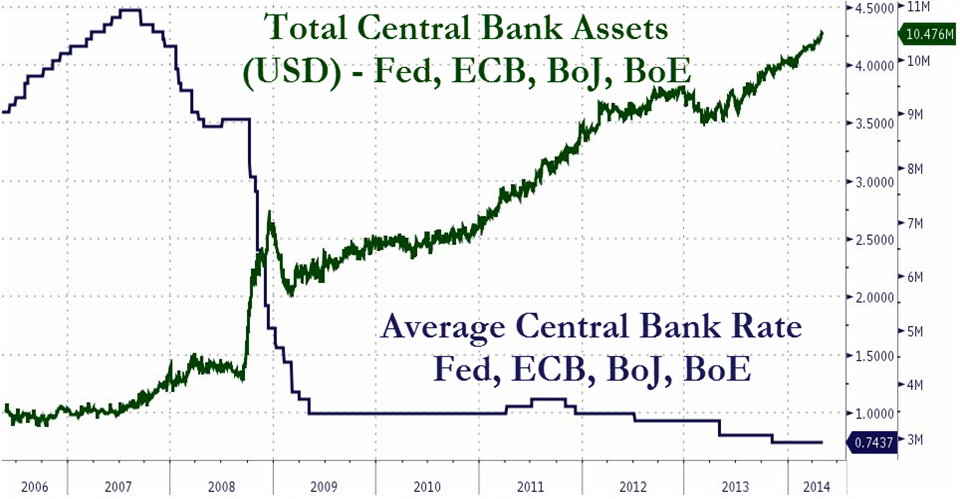 The central bank leaders today are considered godlike by their ability to move and control markets. In reality, they control nothing. Someday we will wake up and someone holding an IOU in the $280 trillion debt market will decide not to roll it forward and they will ask for their money back. The person standing next to them may see them do this and decide they should ask for their money back too. Interest rates, which have been falling around the world for 32 years, will rise off their ridiculous 2 percent levels and move higher. The tornado will have turned and the $10 trillion in QE will be seen as a small handheld fan in comparison to the power of a 280 trillion dollar debt market.

Then you will see the real crisis unfold and the world will turn to their saviors; the central banks. The fear will not come when paper assets begin to experience declines, it will come when investors collectively realize central banks have no power to stop a worldwide debt avalanche.

When this moment arrives there will be chaos and there will be opportunity. For those that seek to go further down the rabbit hole and peer into the future, I highly suggest you read The Death Of Money, which walks through how the new monetary system will be created after the current one collapses. 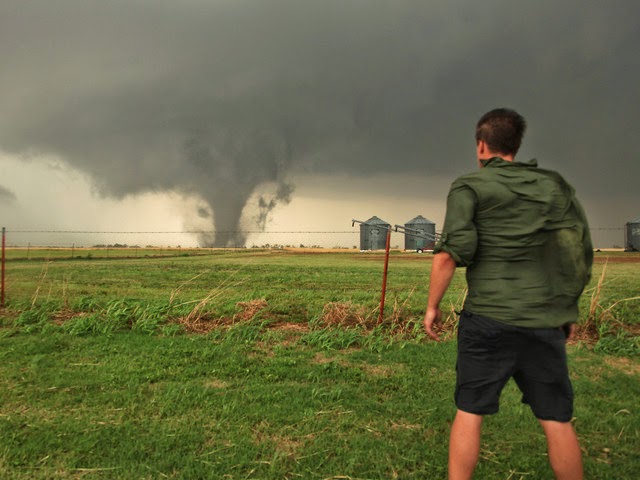