The most recent U.S. foreign debt holdings were released this week (data through August 2014) showing countries outside the United States now hold a record $6.07 trillion in U.S. treasury debt. 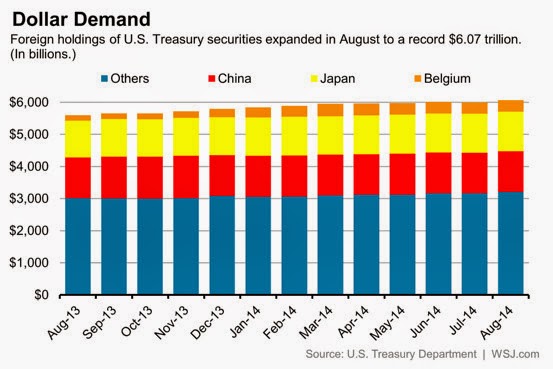 China and Japan remain the largest holders with Belgium growing fast (many assume Belgium is used by China as a remote buying station).

Most of the debt issued by China and Japan is held within their own borders by institutions and individual investors. Understanding where the debt is held will become important as we approach the next stage of the sovereign debt crisis.

For example, while both the United States and Japan will continue to "pay down" their debts through depreciation (central banks purchasing the debt with printed money), when push comes to shove it is far more likely the U.S. government will require foreign bond holders to take a "haircut" on their debt holdings (remember the Greek haircut?). Japan, on the other hand, would only bankrupt its financial system and decimate the retirement accounts of individual citizens with such a haircut.

When it comes to the breaking point, politicians will always do what will keep them in office for just one more voting term, which will be to push back the pain for those casting votes as long as possible. While this type of discussion is most likely further down the road for the United States, the Japanese currency and bond markets can collapse at any moment.

For more see: How Far Could The Japanese Yen Fall?