From John Hussman this week:

"The upshot is this. Quantitative easing only “works” to the extent that default-free, low interest liquidity is viewed as an inferior holding. When investor psychology shifts toward increasing risk aversion – which we can reasonably measure through the uniformity or dispersion of market internals, the variation of credit spreads between risky and safe debt, and investor sponsorship as reflected in price-volume behavior – default-free, low-interest liquidity is no longer considered inferior. It’s actually desirable, so creating more of the stuff is not supportive to stock prices. We observed exactly that during the 2000-2002 and 2007-2009 plunges, which took the S&P 500 down by half in each episode, even as the Fed was easing persistently and aggressively. A shift toward increasing internal dispersion and widening credit spreads leaves risky, overvalued, overbought, overbullish markets extremely vulnerable to air-pockets, free-falls, and crashes."

When will psychology shift toward risk aversion? It is impossible to know. We do know that we have been in risk-on mode for 5.5 years, the fourth longest period in history without an interruption in euphoric sentiment (red line below). We are still chasing the two longest periods in history which occurred in 1990 and 1921. History now records those as two periods where psychology completely diverged from market fundamentals creating generational speculative bubbles. The current record setting run is viewed as a "healthy bull market with room to run on the upside." My guess is that history will rewrite a different perspective.

The current rally has pushed the U.S. stock market 90% above its long term regression growth line, which has only occurred once before in history from March 1998 to July 2001. The market cap of Apple recently became worth more than the entire stock market of Russia after already surpassing Mexico and Malaysia. It is closing in on Singapore. This means the market value of a single company, which essentially makes two products, is worth more than every single company on the Russian stock exchange combined. 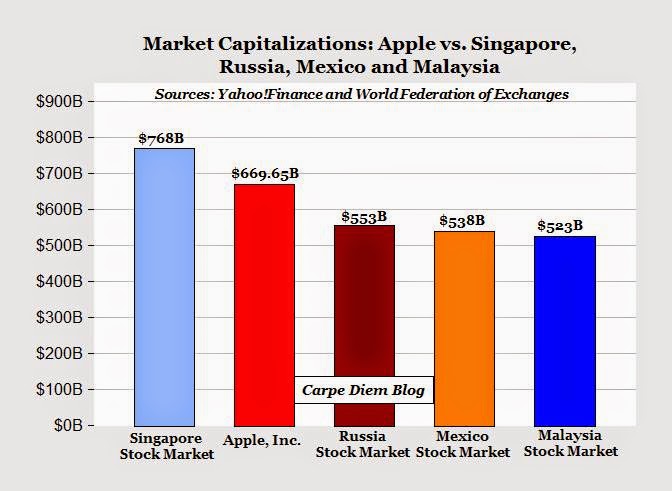 Profit margins relative to the size of the overall U.S. economy continue to sit at all time record highs (blue line) while U.S. wages continue their secular downtrend (red line). Profit margins have historically been a mean reverting economic data point, however, analysts loading up on U.S. stocks today continue to believe this time will be different.