Many of the economists and financial analysts I read regularly and respect are predicting a major move higher in the U.S. dollar through 2015 and beyond. The fundamentals behind their reasons include the Federal Reserve tightening monetary policy compared to other major central banks simultaneously loosening and the overall strength of the U.S. economy relative to the rest of the world.

These both make sense, and I agree that the U.S. dollar should rise based on these fundamentals against some of the major currencies around the world such as the Japanese yen and the Euro. The problem I have with this in the short term is price and sentiment. The U.S. dollar has already strengthened significantly against the Japanese yen and Euro over the past two years and it appears to be a completely one sided trade at the moment.

In regards to many of the emerging market currencies you can add another piece against this argument: fundamentals. The U.S. currency is fundamentally flawed based on the United States economy's dependence on debt growth for.....everything. Just as with Japan, but in a far less extreme case, if interest rates were to begin to move higher in any sort of meaningful way it would expose an enormous layer of malinvestment spread across the U.S. economy. Emerging markets already have high interest rates, most at double digits and higher.

The second and third arguments against dollar strength against EM currencies are price and sentiment. In the chart below you can see emerging market currencies are now below their 2008 and 2002 lows against the U.S. dollar. While there are reasons why investors could continue to pull money out in the years ahead (hot money reversals from the Fed's easy monetary policy, China's slowdown, flight to safety, etc.), how much of that has already been baked into the cake? 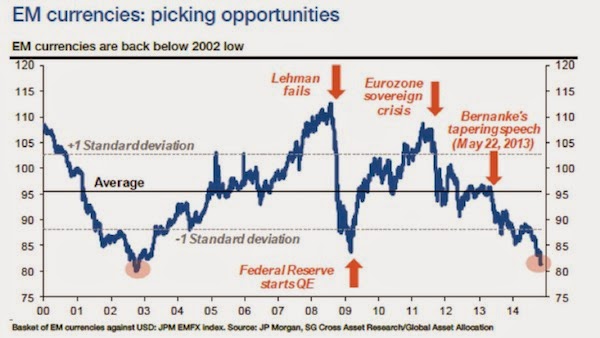 Sentiment is almost as one sided with emerging market currencies (complete love fest for the U.S. dollar and hatred for EM currencies) as it is for the developed countries such as Japan.

I understand all the reasons why the Brazilian real and Indian Rupee can fall against the U.S. dollar moving forward, but how much of that has been priced in with the currencies declining to new 15 year lows? Based on price and sentiment I am neutral or slightly bullish on the short term direction of these currencies and extremely bullish on their long term potential. I am beginning to slowly add to positions now. My hope, as always, is panic will enter the markets and push them into further oversold territory. For a perfect example of that, see what occurred with the Russian Ruble earlier this month.