To say there is full blown panic in the markets surrounding Russia and oil is surely an understatement. While I have been discussing the oil price decline over the past few weeks (oil has now collapsed down to $54), Russia's currency decline has been even more severe over the past year.

The Russian ruble began the year at 33 against the U.S. dollar and fell 13% yesterday alone to finish the day at 66 (then moved past 70 in overnight trading). That is a staggering 53% decline in a single year. The chart below shows the parabolic decline in the Ruble over the past few weeks. 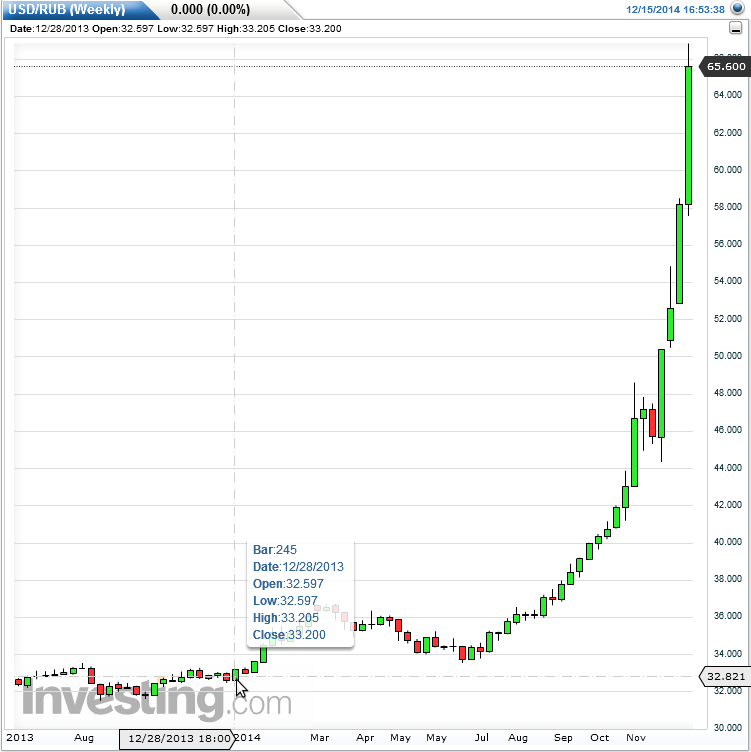 Last night the central bank announced a surprise rate hike of 6.50%, bringing the benchmark interest rate to 17%. This is the sixth rate increase this year. 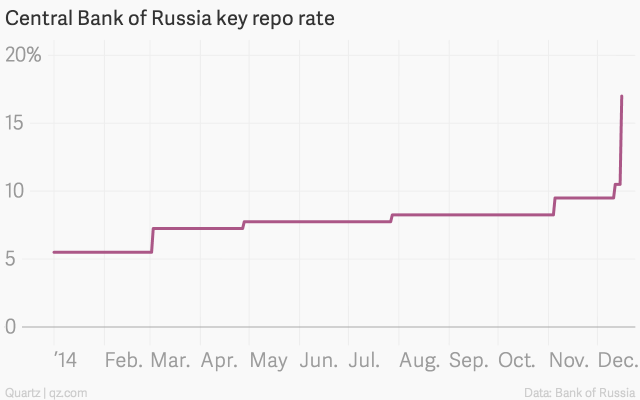 To help keep the magnitude of this rate increase in perspective, the U.S. currently has rates held at 0.0%. Just imagine the sheer terror that would engulf the U.S. markets if the Fed announced a surprise overnight rate increase of 50 basis points (0.50%). The Russian central bank just increased it by 6.50% overnight!

In 1986, oil fell from over $30 a barrel down to a range of $11 - $13 where it stayed through 1989. This was a large contributor to the fall of the Soviet Union. Many making comparisons to that period today are forgetting the importance of the currency decline mirroring oil's fall. In addition, Russia has far less government debt than they did during that period.

After experiencing a sovereign debt default in 1998 Russia learned the important lesson of holding an enormous foreign reserve war chest, which now sits at $416 billion (after selling $80 billion into the market already this year to defend the ruble).

Here's the best way to explain how this war chest is deployed:

If the Russian ruble begins to fall in the foreign exchange markets, the central bank can enter the markets and sell foreign reserves (the U.S. dollar for example) in exchange for Russian rubles. This has the obvious effect of driving up the value of the ruble (because they are buying it), or stemming its decline. By having this reserve available and promising the markets they are always ready to step in and use it keeps speculators on their toes.

Other countries around the world, such as Brazil, India and China, have also been building these enormous war chests of foreign reserves since the last emerging market crisis in 1998. India was able to stop a mini-crash on the rupee in 2013 following the U.S. Fed taper tantrum.

I will explore my thoughts surrounding the importance of these global reserves in the future (they are part of the reason I am extremely bullish long term on emerging market asset classes), but let's get back to the star of the present; Russia.

The Russian government currently has one of the cleanest balance sheets on the planet. Their current debt to GDP level of only 13.41% looks incredible compared to most sovereign debtors around the world. On top of their foreign reserve savings and abundance of natural resources available to export to the world, Russia has been accumulating gold. While that is unimportant to today's story, it will become extremely relevant following the next major financial collapse when the current monetary system will need to be restructured. Those that come to the table will do so with their gold reserves, and those countries will make the new rules. But again, that is a story for another day.

Russian banks and companies owe nearly $700 billion in external debt, denominated mostly in dollars. With the ruble falling by 50% over the last year, it essentially doubles the burden of paying back this $700 billion. With sanctions put in place by foreign lenders due to Russia's involvement with Ukraine, many of these smaller companies and banks have been shut out of the debt markets. There is about $125 billion of debt that must be rolled over (refinanced) by the end of 2015. Many of these companies have built up foreign cash reserves (similar to the government) to prepare for an event like this happening. Others will have the opportunity to work with the government for help. The rest will be in serious trouble unless the debt markets re-open for them.

The smaller cap Russian companies have seen their stock prices destroyed across the board over the past year. Many are down 80% to 90% with price to earnings ratios now in the low single digits. Investors with b*lls of steel and the ability to determine which companies will successful refinance and survive through this period will experience unbelievable long term profits by taking positions in the market today.

There may be other long term pockets of opportunity in Russia as well.

While the banking and corporate sector of the Russian bond market is murky, we know where the Russian government sits. They owe $38 billion of debt denominated in U.S. dollars, with only $6 billion of interest and principle payments due by the end of 2015. Remember, they currently hold over $400 billion in foreign reserves so they certainly do not need to panic over this $6 billion due in the next year.

A 3 year government bond in Russia currently yields over 18%. That means the government will pay you 18% per year to hold their bonds and at the end of the third year you will receive your principle back. What is the danger of purchasing such a bond? The government could default and you may only receive a portion (or none) of your investment back. Or, if you purchased the bond in Russian currency it could continue to free fall in value over the coming months. If the currency falls by another 50% over the next year, you will feel little excitement over your 18% return (which would only now equal a 9% real return in U.S. dollars with the principle you would receive back at the end of the three years cut in half). With the currency falling by 13% yesterday alone, it is certainly not for the faint of heart.

Please understand I'm not telling anyone to purchase Russian stocks, bonds or currency which are all in complete free fall. I'm only trying to be a contrarian voice at what could be close to the absolute peak of panic in Russian markets. There are many investors I consider extremely intelligent looking for value in this market at the moment, but it takes a surgeon-like financial skill set to know where to enter and make picks.