The Fed Will Not Stop The Coming Crash In U.S. Stocks

The largest and most dangerous misconception in the financial world today is that central banks have the ability to control the direction of markets. History has show with clear distinction this is not the case, but investor's minds continuously experience the "recency bias."

During gold's most recent cyclical bull rally (2008 to 2011) analysts put up a chart of the price of gold layered against the the Fed's balance sheet growth. They tracked with each other for three straight years, which made investors feel that gold's rally would always track side by side with the Fed's balance sheet.

We know now this did not occur as the Fed continued expanding its balance sheet through QE3 while gold experienced its second major cyclical decline of the current secular bull market. While the Fed's balance sheet impacts the fundamentals for gold's price direction, it cannot be used as direct causation for the short term movement in its price.

During gold's secular bear market decline from 1980 to 2000, the Fed was steadily lowering interest rates and loosening monetary policy. 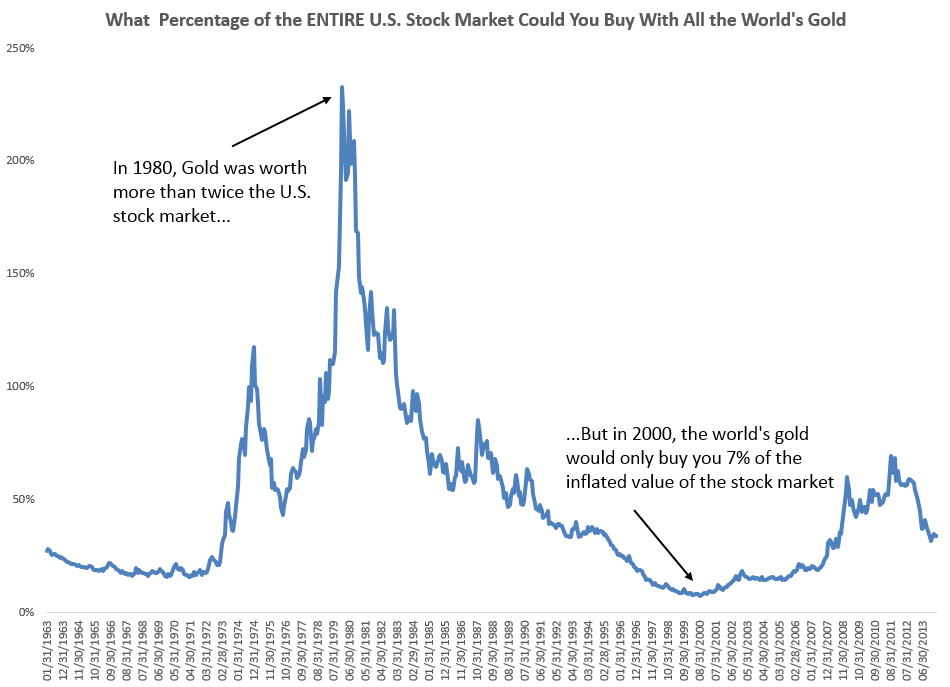 Since the arrival of QE in early 2009 analysts have been tracking the S&P 500 against the Fed's balance sheet. This has once again created the myth that the Fed pushes U.S. stocks higher and guides them lower. 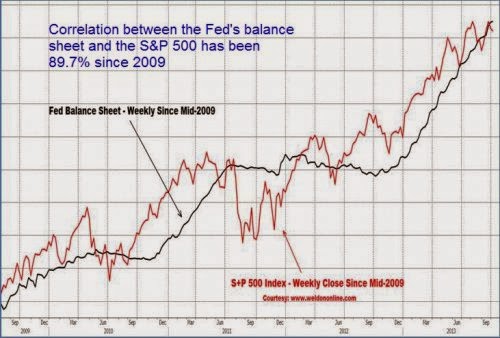 This myth has already proven itself to be untrue as the Fed began tapering (slowing reducing the size) of QE in late 2013 and ended the program in October 2014. Stocks have risen steadily throughout this process and are currently sitting at all time record highs as I type this morning.

Even with this recent evidence available that stocks have already diverged from the Fed, investors cling to the notion that if the stock market begins to fall the Fed will step in with a new QE program and instantly reverse the price decline. As I said at the outset, this belief is the most dangerous assumption that permeates within the minds of investors today. 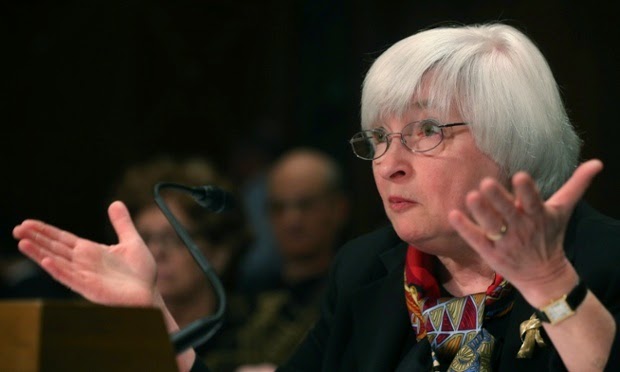 Because we are currently sitting at 0.0% interest rates the only possible way for the Fed to ease is with QE, which can be thought of as bringing rates to negative levels. The size of QE programs has become the new Fed fund rates in the perverse financial world we live in today.

So the question is, if U.S. stocks were to fall (which most people believe is now impossible to begin with), and the Fed were to begin lowering rates downward into negative territory (using QE), would they be able to instantly stop a market decline? Let's take a quick walk through history....

The 1920's run in stock prices peaked at the very end of 1929. When the market began to roll over and decline the Fed began cutting rates on February 11, 1930. The market would then go on to decline by 90% over the next two years through the rate cuts.

When the market peaked in 2000 after the greatest run in market history from 1980 to 2000, the Fed began cutting rates a few months later on January 3, 2001. The NASDAQ would go on to decline 80% from its peak through the rate cuts.

The Fed began cutting interest rates on September 18, 2007, two months before the U.S. stock market would hit its all time high. They would continue cutting rates for the next two years, bringing them all the way down to 0%. During that time the market declined by over 50% through the rate cuts.

Correlation equals causation only when charts line up for a brief period in history. The human mind acts as a problem solving machine that always looks for the simplest and fastest possible answer to any problem that presents itself so it can move on and begin solving the next one. The mantra that the Fed will always step in to save the markets solves this problem in investor's mind. They can comfortable put their life savings into U.S. stock index funds and move on to something else in their life. 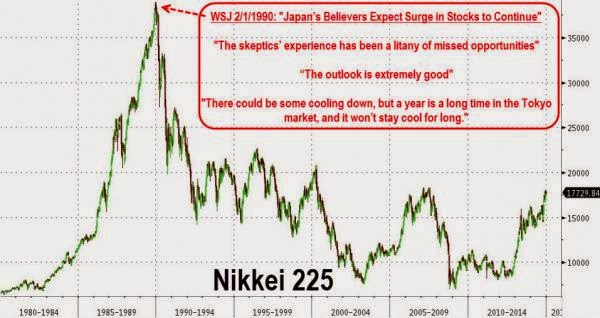 I live in the United States so I can live, breath and take in the almost religious belief that stocks will always move higher in the long run. Americans leave school and then put their hard earned money into U.S. stock 401ks for the duration of their entire working years. Everyone around them does it, the media and government tell them to do it, financial advisors tell them to do it, and it has worked brilliantly for as long as almost any American has been working in the United States (no one remembers the 1970's today).

If you showed the chart below to an average American and told them it was anything except for U.S. stocks, they would be most likely terrified of the future price potential of the asset. If you showed this chart to a Japanese citizen you would probably make them cry if you asked them enter the market with a portion of their savings. It would appear, even to the most casual viewer, we are in the final stages of the third bubble in the last 15 years (this chart is dated, the S&P has rocked up to 2090 as I write this morning) 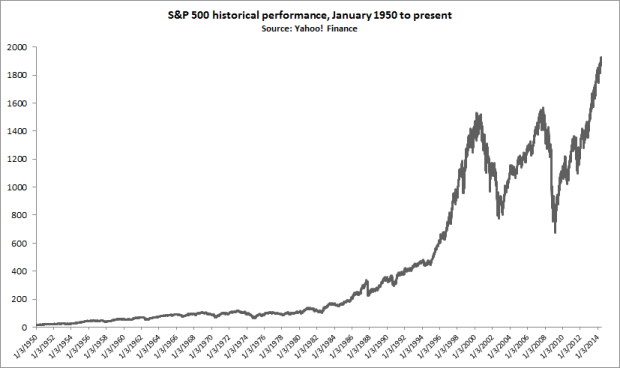 Investors understand and believe the previous two bubbles and crashes were driven by overly accommodative Fed policy. However, after 5 years of the most accomodative monetary policy in Federal Reserve history, with stocks sitting at all time record high prices, and almost every valuation metric resting at all time record high levels, investors believe this time is different.

I'm betting that this time is not different, and I'm willing to wait for as long as it takes for prices to move back into realistic historical valuations before entering. There are just too many other cheap investment opportunities around the world to invest in. If you live in the United States, take a moment to review your portfolio before entering the new year. If U.S. stock funds are your largest investment, you are sitting in the most expensive asset class on the planet.

For more see: What If The Stock Market Fell & Did Not Recover?