The Long Term Consequences Of A Short Term Bounce In U.S. Home Prices

From late 2008 to early 2012 roughly one third of every mortgage holder in the United States was underwater (the mortgage on their home was higher than the price of their home). With home prices bottoming in early 2012, the number of underwater mortgages has steadily declined to under 8% today. The remaining 8% represent 4 million Americans which are underwater by an average of $39,000. 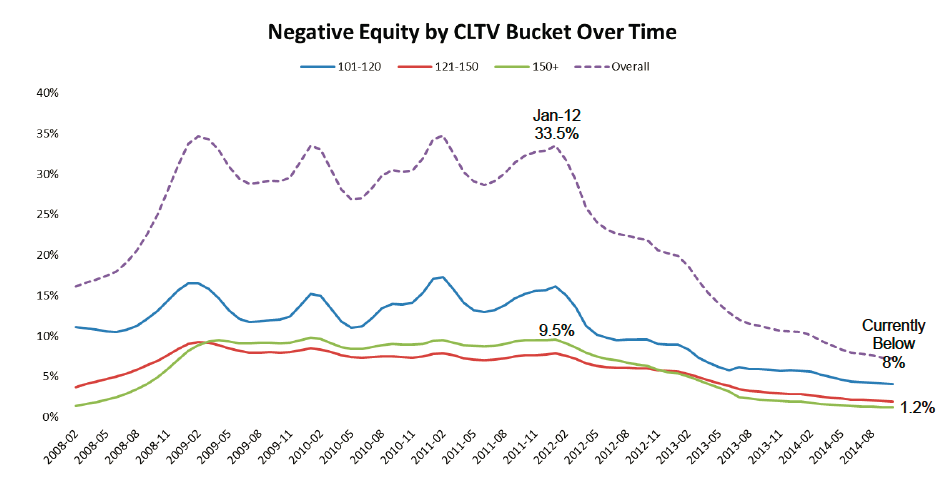 This is great news for many Americans who were formally trapped within their homes, but what is the long term cost the U.S. will endure to achieve this short term economic boost?

The government has become the mortgage market through Fannie Mae, Freddie Mac, FHA, etc. This has allowed new borrowers to continue borrowing with low down payments and sub-par credit and income levels. I understand conditions are tighter than they were in 2006, but they are far looser than where the free market would have set them following the 2008 crash.

The Federal Reserve entered the market in early 2009 and has been purchasing hundreds of billions of dollars worth of mortgages over the past five years. This pushed mortgage rates down to all-time record low yields; far below where the free market would have set interest rates on mortgages.

If these two actions were not taken home prices would have fallen much further; down to a level where the free market would feel comfortable lending to home owners based on their savings, income and credit criteria.

With home prices far lower a hypothetical new buyer entering the market today would only need to borrow $100,000 for a quality new home for their family, instead of perhaps the $300,000 that is actually needed. That extra $200,000 in debt could have been used over the next 30 years to save, re-invest in the economy, or purchase other goods (also growing the economy).

So where do we go from here?

It should be obvious with the government and Federal Reserve "all-in" there is only one direction we can go. If the government were to step away from the mortgage market in any capacity or if the Federal Reserve were to ever let mortgage rates rise again, home prices would immediately assume their downtrend. Even with full government support in place home prices are beginning to slow and even turn down in many areas.

Was it all worth it? I guess it depends on who you ask.