From John Hussman's commentary this week:

"Meanwhile, the S&P 500 is more than double its historical valuation norms on reliable measures (with about 90% correlation with actual subsequent 10-year market returns), sentiment is lopsided, and we observe dispersion across market internals, along with widening credit spreads. These and similar considerations present a coherent pattern that has been informative in market cycles across a century of history – including the period since 2009. None of those considerations inform us that the U.S. stock market currently presents a desirable opportunity to accept risk.

As was true at the 2000 and 2007 extremes, Wall Street is quite measurably out of its mind. There's clear evidence that valuations have little short-term impact provided that risk-aversion is in retreat (which can be read out of market internals and credit spreads, which are now going the wrong way). There's no evidence, however, that the historical relationship between valuations and longer-term returns has weakened at all. Yet somehow the awful completion of this cycle will be just as surprising as it was the last two times around – not to mention every other time in history that reliable valuation measures were similarly extreme. Honestly, you’ve all gone mad."

The Buffett indicator of stock market under/over valuation reached a new post 2009 high at 131% in November. The indicator measures the market cap of U.S. stocks to GDP. It is rapidly closing in on the mania peak reached in 2000. Will it get there before gravity returns?

U.S. stocks have now become 37% of total global market capitalization. Japanese stocks made up 42% of the global market in 1990 (the previous record) before they collapsed and fell for 23 years. 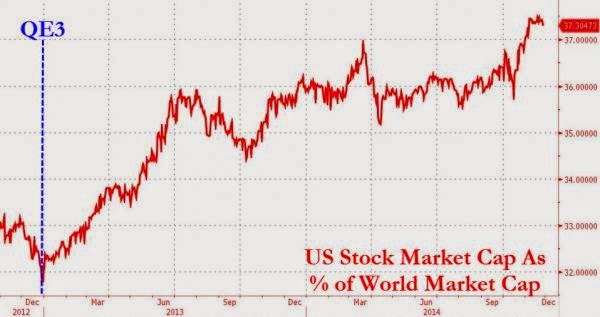 Here is the US stock market performance vs. the rest of the world. After 10 years of foreign stock out performance following the 2000 top, U.S. stocks have been outperforming the world by a wide margin since 2011. Will this data set mean revert again?

The amount of assets in the Rydex S&P 500 bullish fund is now double the amount in the bearish fund for the first time since February 2001. While investors have moved all in U.S. stocks betting long, everyone has given up betting against a decline. This becomes important as stocks put in their top because short sellers are needed to slow market declines (they lock in profits by buying back stocks they borrowed/sold on the way down which slows the market decline with their purchases). If there are no shorts, then the market has the ability to experience a waterfall decline. 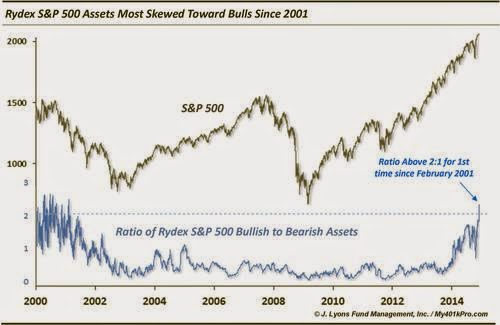