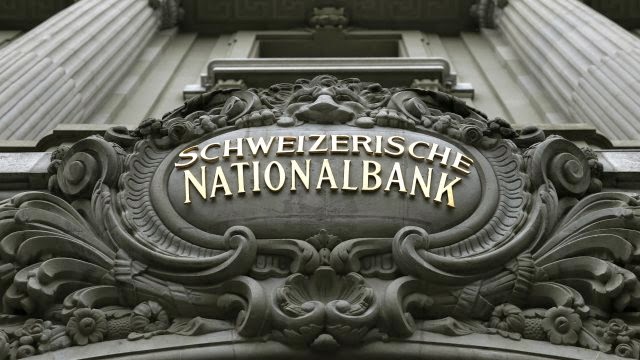 In September 2011, Switzerland's central bank announced they would defend their currency against the euro at $1.20. Money was flooding into Switzerland from Europe as many people felt banks would close or governments would default on debts (Greece, Italy, Spain). As money entered the country, euros were sold in exchange for Swiss francs, which caused the franc to rise violently against the euro.

As we have seen throughout the currency wars over the past four years when your currency rises rapidly it causes problems for corporations within your country. Your exports are less competitive and business operations taking place outside your country experience lower profits or even losses.

The floor at $1.20 meant whenever the value of the Swiss franc reached $1.20 against the euro, the Swiss central bank would enter the market and purchase euros (selling francs). This caused their balance sheet to mushroom in size as they have had to defend the peg continuously since the announcement in late 2011. 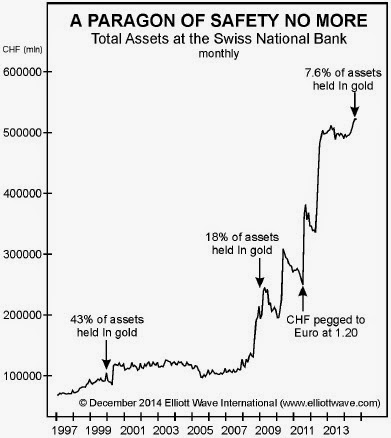 Knowing the Swiss central bank stood ready to defend the currency at 1.20 allowed currency traders to put on massive (leveraged) stops on the Swiss/Euro currency pair at 1.20.

Then this morning happened....

Overnight, completely out of the blue while most of the world was sleeping, the Swiss central bank decided to remove the peg. Computer algorithms triggered massive buying orders on the news. This then instantly triggered the stops at the 1.20 line.  The Swiss franc strengthened from 1.20 against the euro down to 0.75 in a matter of seconds. There is no historical comparison to this type of movement in the developed currency markets. The Swiss franc has fallen back to 1.03 as I write this, but who knows where we go from here. Switzerland's stock market crashed 12% in 10 minutes, the largest decline since the 1987 worldwide crash.

What non-professional currency traders should learn from this action is the all consuming trust in central banks to control every market around the world should be questioned. This is more relevant for investors in developed countries who have been implicitly promised central banks will always push their stock portfolios higher. They have been implicitly promised interest rates will always remain low, currency markets will always remain calm and inflation will stay subdued.

As we have seen overnight, even the explicit promises can be removed in the blink of an eye.